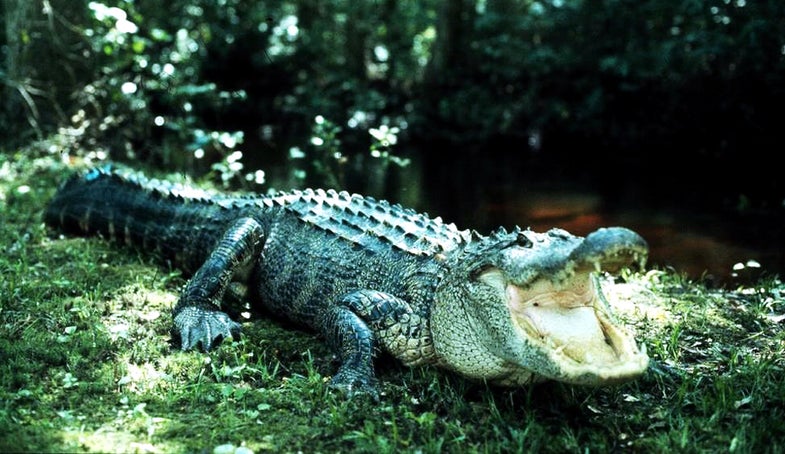 North Carolina wildlife officials are considering whether to allow the state’s first-ever alligator hunting season in 2016, to help manage a burgeoning population of the reptiles in developing parts of the state. NBC affiliate WECT reports that the North Carolina Wildlife Resources Commission (NCWRC) is weighing the possibility of a month-long season for the reptiles, and is currently accepting public input before it makes any final decision.

Florida, Georgia, Alabama, Arkansas, Mississippi, Louisiana, Texas, and the Tar Heel state’s lower-latitude neighbor, South Carolina, are currently the only states offering alligator hunting licenses. But NCWRC captain Todd Radabaugh told WECT that populations are strong enough, particularly in urban areas, that hunting would help control the animal’s numbers in North Carolina. “With the ever-changing landscape here in the state, not only has the alligator population increased, but the human population has as well, which leads to alligator and human conflicts, especially in the Wilmington and Brunswick County areas,” Radabaugh said.

Commissioners won’t hold an official vote on the option until February, after rules governing the harvest techniques, slot size, and quota are finalized. Public hearings during which residents can speak for or against the proposal will begin January 5th in Bladen County.

“The way it is written now, and up for consideration for public comment, is with archery equipment, with catch poles, wooden pegs and the like. There is nothing in the write-up, at this time, that would allow for hooks or snaring of the alligator,” Radabaugh said. Likewise, wildlife diversity coordinator Allen Boynton told Public Radio East that, as it stands, firearms wouldn’t be permitted to kill the alligators once they’re captured.

Public Radio East notes that the American alligator was nearly extinct by the 1950s and listed as an endangered species in the late 1960s. Over the past twenty years, however, the alligator’s populations have recovered, though they are still protected in North Carolina “because they look similar to crocodiles.”