This week a hunting nun in northwestern Pennsylvania drew both praise and criticism after she killed a 10-point whitetail buck... 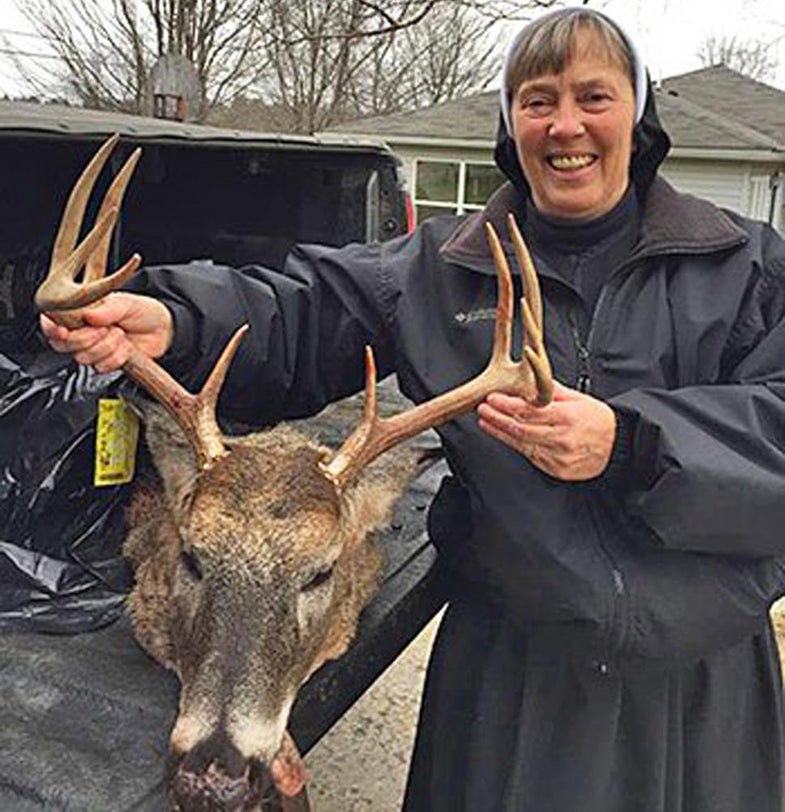 This week a hunting nun in northwestern Pennsylvania drew both praise and criticism after she killed a 10-point whitetail buck and news of her success made its way to social media.

NBC affiliate WICU reports that, though taking the buck, given its size, was a once-in-a-lifetime opportunity for Sister John Paul Bauer, a teacher at Elk County Catholic High School, in St. Marys, Pennsylvania, the incident wasn’t a fluke—she’s put in time in the woods ever since learning how to shoot, while serving in the U.S. Navy. Apparently, she never hunted with her father or brothers when she was growing up, but took up the pastime after returning home from the military. “In St. Marys, this is what you do. You go hunting, and everybody goes hunting,” she told CBS Philly about her surprise over the attention she has received. “The coach, myself, the students.”

According to Bauer, while sitting in a treestand on November 30, the opening day of Pennsylvania’s 2015 rifle season, she recited the rosary. At the conclusion, a small herd of does and two bucks appeared. When the largest buck, a 10-point, with a 16-inch spread, wandered into range, she shot it. “I’ve always prayed the Rosary on the treestand,” she told CBS Philly. “That’s a tradition. You get up in the morning. You pray the rosary in the treestand. So, I just think the Blessed Mother did smile upon me. After I realized I got the deer, I thanked God.”

Like many hunters, Bauer said that she views hunting as an act of conservation and a spiritual endeavor. In fact, she had the 200-pound animal processed into sausage and steaks, which she shared with two local families.

Later, someone posted a picture of Bauer in her nun’s habit posing with the big buck to the Erie Catholic Diocese’s Facebook page. The image quickly went viral, garnering nearly 1.5 million views—the majority of them positive and congratulatory. Though, of course, given the nature of social media, the photo also received its share of backlash, too.