Off-Duty Officer Reels in $10M Worth of Cocaine While Fishing

Photograph via Charlotte County Sheriff’s Office Earlier this month, an off-duty police officer was fishing about 20 miles offshore of... 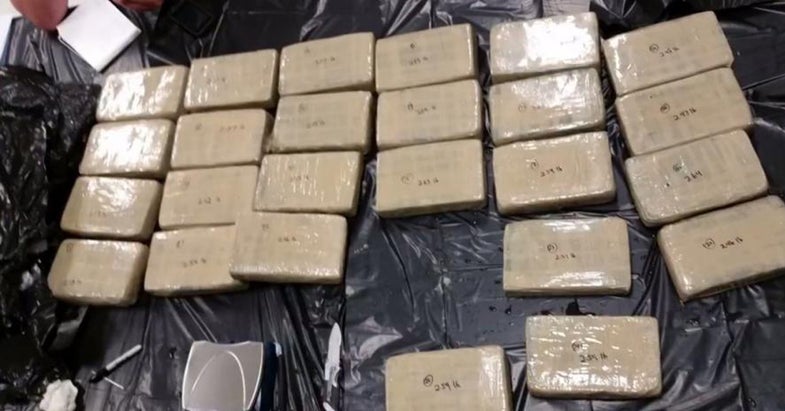 Earlier this month, an off-duty police officer was fishing about 20 miles offshore of Englewood Beach, Florida, in the Gulf of Mexico, when he landed an impressive, unusual haul—approximately $10 million worth of cocaine.

Charlotte County Sheriff Bill Prummell told local station NBC 2 that the off-duty deputy, who remains unidentified while authorities complete their investigation, found the bail of 25 sealed, watertight bricks, weighing approximately 50 pounds, bobbing in the water. Where the load came from, or where it was intended to go, remain a mystery. “We know cocaine is out there, we know it’s coming in through the waterways, but it’s not something we see on a regular basis,” Prummell said.

Realizing the magnitude of the find, the officer immediately called a fellow deputy, who in turn contacted the U.S. Border Patrol. Now both the local sheriff’s office and federal agents are trying to determine where the payload originated.

Ralph Allen, who owns nearby King Fisher Fleet, a local charter and guide service, said that, though there are all sorts of items floating in the ocean, it’s fortuitous that an off-duty officer found the cache. “It could have just as easily been me,” he said, “or one of our boats.” He is also unsure of the package’s possible origins. “Anything that floats can get carried forever. You’ve all heard about messages in a bottle. Makes it clear across the ocean and shows up years later. Same thing applies to anything that floats.”