Earlier this month, 18-year-old Landan Brochu was ice fishing with his father, Richard, on Jessie Lake in Ontario when a... 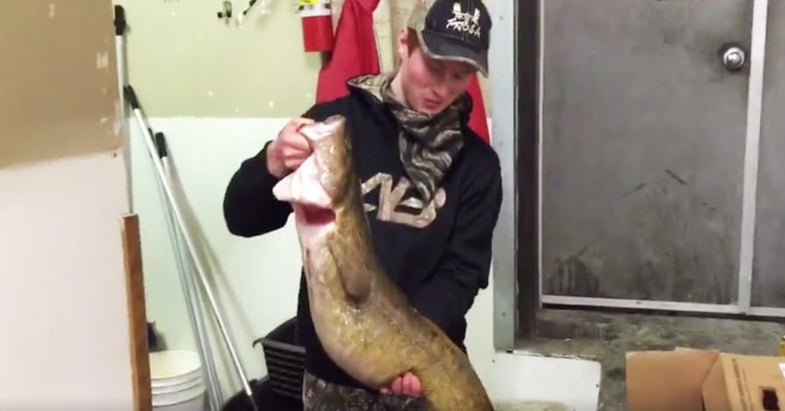 Earlier this month, 18-year-old Landan Brochu was ice fishing with his father, Richard, on Jessie Lake in Ontario when a monstrous fish latched onto the end of his line. When he was able to coax his catch up to the hole, he saw it wasn’t a lake trout, as he’d suspected, but the largest freshwater burbot, a type of cod, he had ever seen. It was big enough, in fact, to beat the Ontario freshwater burbot record by a pound, according to CBC News.

“I had a huge hit on my rod, so I set the hook,” Brochu told reporters. “…My rod was completely buckled over. It was just rolling, instead of trying to swim away even harder.”

Eventually, Brochu was able to subdue the burbot, but now he had a bigger problem—would the fish fit through the 8-inch-wide hole he’d drilled through the ice? At one point, Brochu almost lost his grip, but he was able to stick a hand into the frigid water and grab the fish behind its gills. “It came up and…opened its mouth and I couldn’t believe it,” Brochu said. “I started dancing around; I even forgot to grab it and pick it up out of the hole.”

Brochu’s dad measured the fish at 37 inches long with a 22-inch girth. They had no idea what the fish weighed until they finished fishing that day and were able to use a certified scale at a meat shop in Thunder Bay. When it was all said and done, Brochu’s burbot weighed 16.8 pounds, a full pound heavier than the former Ontario record, which was also caught in Jesse Lake. According to the International Game Fish Association, the current world record burbot weighed just over 25 pounds and was caught in northern Saskatchewan in 2010.

Brochu told reporters that he’s going to submit his fish to the Ontario Federation of Anglers and Hunters for record consideration, but he also noted that he’s just happy to have had the experience, and doesn’t care whether his name enters the record books or not.