A British Columbia photographer recently captured something you don’t see every day—a scuffle between a bald eagle and a Canada... 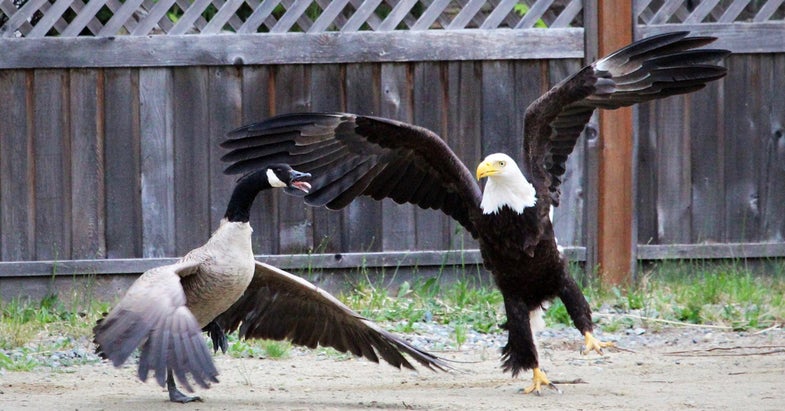 A British Columbia photographer recently captured something you don’t see every day—a scuffle between a bald eagle and a Canada goose. According to Global News, Lisa Bell was camping at the Spider Lake Springs in British Columbia, when just after 7 a.m., she heard noise coming from a nearby pond. Upon her arrival, she discovered an eagle standing atop a lifeless-looking goose.

“It was very still; there was no more noise coming out of him,” Bell tells Global News. “But as it turns out, I think he was probably playing dead.”

Indeed, as the eagle maneuvered to get a better grip, the goose got away. The eagle gave chase, but the goose dove underwater. The eagle then doubled back and tried once more to attack the goose, but it was unsuccessful. “It’s nature; it’s spectacular, actually,” Bell tells CTV News. “You’re rooting for the goose and seeing what’s going to happen.”

The eagle perched in a nearby tree, where, eventually, another eagle joined it. But the birds never got another shot at the goose. “It was amazing,” Bell says.

Here are a few of the photographs, but you can see the full collection here.