Poachers Killed One of the Largest Elk in Pennsylvania History

One of the largest bull elk ever recorded in Pennsylvania was killed illegally, along with two other elk, in Clearfield... 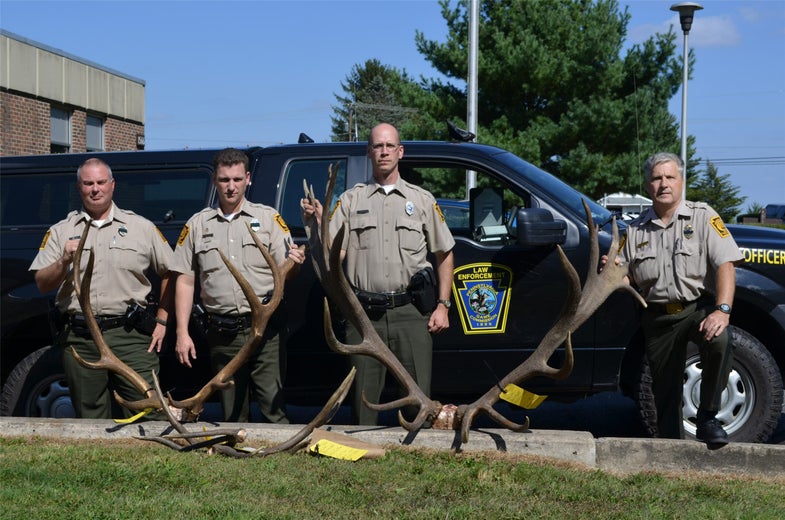 One of the largest bull elk ever recorded in Pennsylvania was killed illegally, along with two other elk, in Clearfield County in September. Three local men are being charged with “teaming in a poaching effort,” the Pennsylvania Game Commission announced yesterday.

In its statement, the Game Commission confirmed that the largest of the illegally harvested elk had a 10×9 non-typical rack that would have scored 432 7/8 inches B&C. It would have ranked as the third-largest bull elk in the state’s history. The other bulls were a 5×7 and a 4×5.

A local resident found the body of the smallest bull stripped of its antlers and called officials. Upon investigation, Wildlife Conservation Officer Mark Gritzer pulled a 7mm bullet from the elk’s shoulder. While monitoring the area six days later, Gritzer observed suspicious spotlighting from a pickup truck near a reclaimed strip mine where elk have been active. He heard a shot fired, called for backup, and arrived on the scene to find the men with a 7mm rifle consistent with that of the previous kill, as well as a handsaw covered in elk hair and tissue.

If convicted, the poachers will face $11,500 in replacement costs for the elk, and thousands in additional fines. All three men are facing the initial charge, but Frank Gordo Buchanan, Jr., 25, who admitted to killing all three bulls with plans to sell the antlers online, will face additional charges.