A Florida teenager caught a 693-pound swordfish—potentially a new state record—this past Labor Day. It was only his second trip... 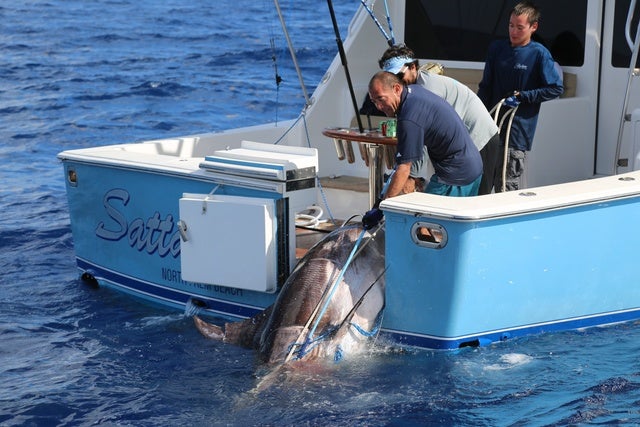 A Florida teenager caught a 693-pound swordfish—potentially a new state record—this past Labor Day. It was only his second trip aimed at reeling in the elusive billfish.

A story from NBC affiliate WPTV says 17-year old Adam Sattar was fishing with his family on their boat about 30 miles off Jupiter when he hooked the huge fish. “He came up twice. All we saw was a big shadow. Thought it might have been a shark. The third time he came up we ended up seeing the fish, stuck him with the gaffe and tied him,” Sattar says. He and his dad fought the fish for nearly four hours before he could get it close enough to gaff. At that point, they realized the fish was too large to bring into the boat, so they towed it to Sailfish Marina where it was weighed and measured.

All told, the fish weighed 693.8 pounds and was 172 inches long, and while the family kepts the bill of the fish, they shared the fish’s meat with others at the marina.

Unfortunately, there are doubts as to whether Sattar’s fish will become a record. Because he caught the fish using an electric reel, something that’s typically against record guidelines, officials might not declare his fish a record breaker. Another angler landed a 683-pound swordfish in the Keys in 2012, but it was never declared a record because the angler used an electric reel. Regardless, Sattar and his father are still submitting the necessary paperwork to find out if the fish qualifies for any records.

Photo by Paul Kabalin via WPTV