A proposal to add diversity to the Federal Duck Stamp has drawn criticism from hunters, artists, and even some birders.... 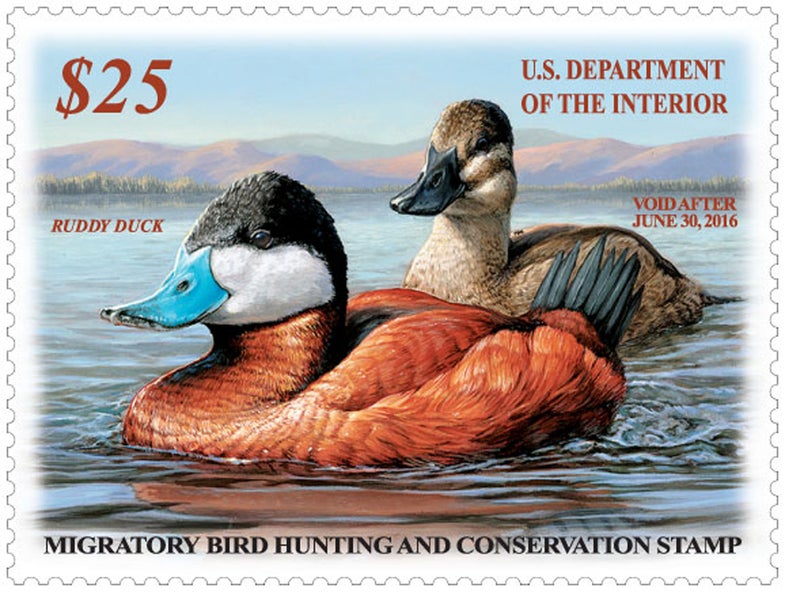 A proposal to add diversity to the Federal Duck Stamp has drawn criticism from hunters, artists, and even some birders. As the New York Times reports, the Fish and Wildlife Service recently proposed requiring duck-stamp artists to include non-game birds, such as herons, in their paintings, along with traditional waterfowl species. The proposal hopes to broaden the appeal of the 82-year-old duck stamp and encourage more non-consumptive users to buy it. Migratory bird hunters, who are required by law to purchase the $25 stamp, have declined in number since the 1970s, and FWS hopes that the move will help make up for this decrease.

“The population of duck hunters, our main customers, is declining,” Daniel Ashe, FWS director told the Times. “So we need to look at diversifying the customer base for the duck stamp.”

A private group called Friends of the Migratory Bird/Duck Stamp has urged the change. “There are 36 to 40 million visitors to the refuge system every year and more of them should be buying stamps,” the group’s president, Paul J. Baicich told reporters.

For 2016, the addition of a non-game bird species will be optional for artists entering the federal duck-stamp competition. Any further change would take effect in future years. Adam Grimm, a wildlife artist from South Dakota, vehemently opposes the proposed requirement. “Birders aren’t going to go out and buy a stamp because it has a little oriole on it,” he told the Times.

Since the Federal Duck Stamp was established in 1934, it has raised more than $800,000,000. Ninety-eight percent of that money has gone to fund acquisition and easements of wetland habitat in the National Wildlife Refuge System. The fee was raised from $15 to $25 last year. Migratory bird hunters must have the stamp, which also serves as admission to any refuge charging an entry fee.