Photograph courtesy of Brian Adler/Wikimedia Commons Wild white deer may be a genetic rarity, but the Seneca Army Depot—a decommissioned... 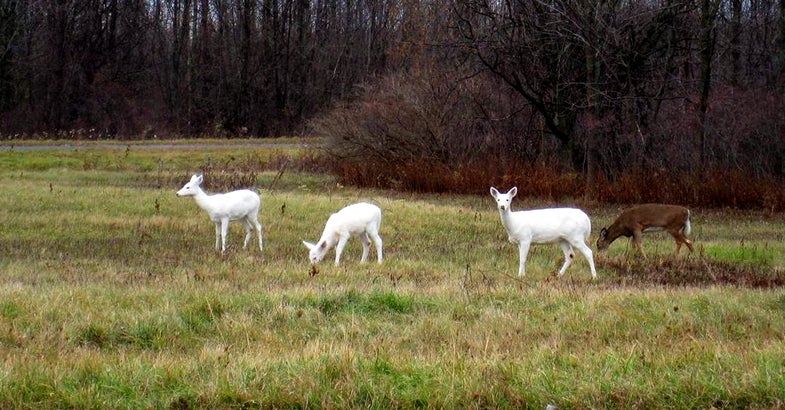 Wild white deer may be a genetic rarity, but the Seneca Army Depot—a decommissioned Cold War weapons storehouse near Romulus, N.Y.—happens to be home to about two hundred of them. With the depot up for auction next month, however, locals worry that the sale could mean the end for these unique animals—a species that has been thriving under lock-and-key for decades. Though an old ammunition bunker may be an uncommon haven for deer, these white deer—which have a strange genetic variation that causes only the pigment in their fur to turn white (unlike albinos, which lack all pigment)—have been living and breeding within the protected 7,000-acre, fenced-in area since the 1940s, when the perimeter of the depot was fenced, trapping dozens of whitetail deer.

“They’re a huge tourist attraction,” Lisette Wilson, owner of a farm store near the old depot, told the Associated Press. “People are astonished. It’s quite the spectacle for them.” But this hot tourist destination has only recently rebounded—most likely due to those interested in saving the unique deer from the impending sale of the property. Without the enclosed range, the Seneca white deer would likely become easy prey for predators (or unique trophies for some hunters) as their fur doesn’t camouflage them within a forest backdrop.

According to Bob Aronson, executive director of the Seneca County Industrial Development Agency, the plan is to sell the whole depot as one parcel. He says that all offers will be considered, but those currently most interested want to graze cattle or grow crops on the property.

Many area residents are opposed to the sale and wish to keep the deer within their already established habitat. The AP reports that locals such as Dennis Money, of Seneca White Deer Inc., are attempting to raise funds in hopes of buying 2,000 to 3,000 acres of the depot property and turning it into a tourist attraction and wildlife preserve. Additionally, the bordering municipalities, as well as organizations such as the Nature Conservancy, are looking for ways to preserve the undeveloped land for the deer. It will be interesting to see what the overall outcome will be once the bidding for the property opens next month.