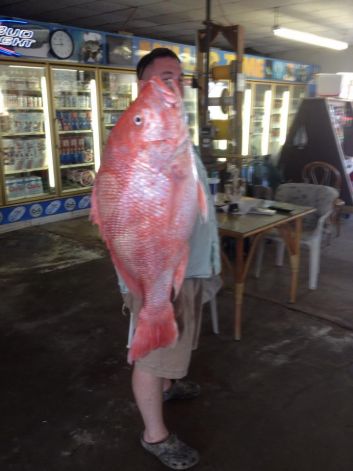 Beaver was fishing with family and friends about five miles off the coast in the Gulf of Mexico, near Port O’ Connor on June 1, and didn’t quite comprehend the magnitude of his fish at first.

“I thought it was a shark or something the way it was pulling,” said Beaver, 28. “When I got it on the boat after about 20 minutes, it was crazy, everybody on the boat was going nuts.”

The group continued to fish for another hour after boating Beaver’s catch before heading to shore and weighing it on official state scales. That’s when they found out his 40-inch long, 38.75-pound fish barely beat out the previous record of 38.13 pounds set in 1998.

“At first, I didn’t think it was big enough,” said Beaver, who used squid as bait and a Penn reel. “I think my wife is more happy about it than I am.”

Beaver said one fillet from his record fish fed his family of four, as well as another family. He still has the other fillet in the freezer for another meal.