Early last week, game wardens in Orange County, Texas, discovered the remains of a missing man inside an alligator killed... 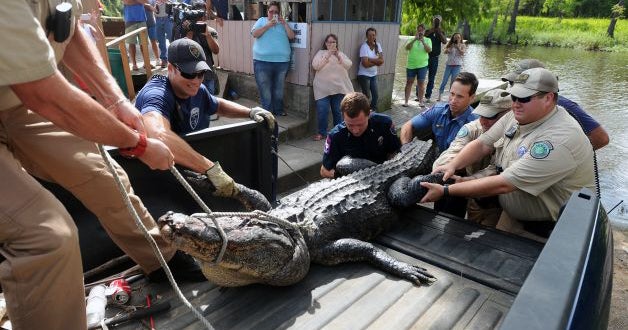 Early last week, game wardens in Orange County, Texas, discovered the remains of a missing man inside an alligator killed by a poacher, becoming the first fatal alligator attack in the state in nearly two centuries.

According to a story from Beaumont Enterprise, on the evening of July 2, Tommie Woodward, of Orange, Texas, visited the restaurant at Burkart’s Marina with a young woman as staff were closing for the night. There, Woodward announced he was going to jump into the bayou, despite warnings from the staff and a sign that reads: “No Swimming. Alligators.” After Woodward was reported missing shortly thereafter , officials searched for him early the next morning and found some of his remains around 4:30 a.m.

Although killing an alligator is a Class C misdemeanor in Texas and punishable by up to $500 fine, a man who identified himself only as “Bear” said he baited the 11-foot-long, 400-pound gator with chicken, killed it with a shotgun, and presented the animal at the marina. “He had to go,” Bear said. “That’s what happens when you kill someone.”

When game wardens arrived at Burkart’s Marina, “Bear” and four unidentified men were posing for pictures around the animal but promptly left in a boat. The Texas Parks and Wildlife Department (TPWD) is still investigating whether someone previously notified the agency of the animal’s presence, which supposedly appeared a few weeks ago.

“We’re still backtracking to make sure a nuisance control hunter was notified,” TPWD Captain Ron Ousley said. “So far in the investigation, the answer is no. It sounds like somebody just took it upon themselves to kill the animal.”

Game wardens seized and dissected the alligator and found more of Woodward’s body inside the animal’s throat. Authorities note the man’s exact cause of death remains unknown pending autopsy reports; however, it’s believed that Woodward likely drowned first, though his injuries—which included major trauma to his left arm and puncture wounds to his upper-left chest—were serious enough to kill him.