A University of Wisconsin-Milwaukee professor is working to restore populations of giant Hexagenia mayflies to the waters of lower Green... 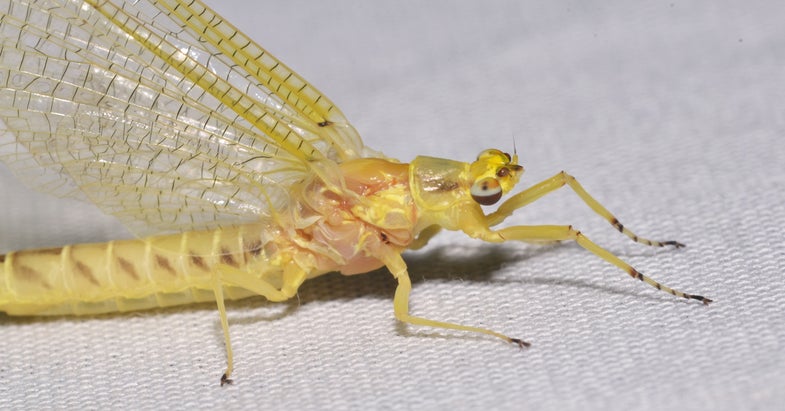 A University of Wisconsin-Milwaukee professor is working to restore populations of giant Hexagenia mayflies to the waters of lower Green Bay—and thereby re-forge a link in the food chain that’s been missing for some 60 years. According to Professor Jerry Kaster, an aquatic invertebrate ecologist in UWM’s School of Freshwater Sciences, unchecked industrial pollution in the first half of the 20th century essentially wiped out the lower bay’s mayfly population by the mid-1950s. Historically, the flies hatched in such abundance that they were said to “blacken the skies,” and in other areas of the country they still do: Mayfly hatches can be so intense on the Mississippi River near LaCrosse, Wisconsin, that they show up on National Weather Service radar.

For the past several years, Kaster and his students have been collecting mayfly eggs from the Mississippi, as well as from Lake Erie in Ohio, and planting them in the shallows of Green Bay. He estimates that they’ve planted about 400 million eggs thus far. “And we know they’re hatching,” he told the Green Bay Press-Gazette.

Before the hexes take to the air as adult mayflies, though, they emerge from the sediment as nymphs. It’s in this form that they serve as an important food source for walleye, yellow perch, and other gamefish. “For all kinds of fish they’re a high-end protein,” Kaster said. “Potentially, this could add millions to the economy…if these mayflies come back, I’m expecting Green Bay to take off like Lake Erie did.”

Because the mayflies are native to the bay (and continue to hatch heavily in many of its tributaries), Kaster’s work has the blessing of the Wisconsin Department of Natural Resources. In the department’s view, Kaster and his team are simply “accelerating the process” that’s occurred naturally as the bay’s water has grown cleaner in recent years.