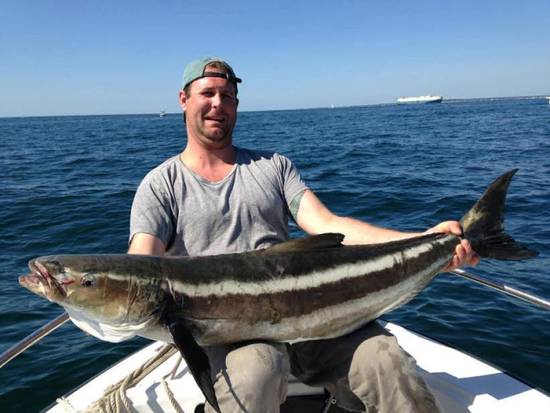 Photo Courtesy of the Providence Journal

On June 19th, angler Matthew McCabe of Warwick, Rhode Island caught a possible state-record cobia—a 36.2-pound fish that was 48.5 inches long and a 23.5 inches in girth, according to the Providence Journal.

McCabe was fishing on his father’s boat with his brother-in-law Todd Taylor, but engine trouble didn’t let them get far from port, so they decided to fish for fluke and black sea bass near Newport.

“It was 11 o’clock and we were bottom fishing with pieces of squid between Brenton Reef and the second red can, off Castle Hill Light. The water was not moving very fast, the drift was not right. So, I put my 17-foot boat in gear to do a little power drifting. We went about 20 feet and, bam: That was it. The rod bent in half. As it came to the boat the first time, I thought it was a shark. Then it jumped out of the water and Todd said, ‘That’s no shark; it’s a cobia!’” McCabe said.

The current state record is a 35 lb., 48-inch long fish caught in 1995, and while cobia are becoming more popular among anglers in the Northeast as ocean and bay water warms, catching them isn’t always easy.

“If Todd wasn’t with me, we would have lost this fish,” McCabe said. “When we pulled it out of net, the 20-pound fluorocarbon hi/low rig was broken, so if he didn’t net the fish we would have lost it for sure. The fish nearly spooled me twice on two separate runs. We finally netted it the third time we brought it to the boat. It kept diving deep, as deep as it could, moving all around under the boat. I was afraid it was going to get cut off on the engine.”