The mysterious cause of death for thousands of eider ducks in Massachusetts has been discovered, thanks to a team of... 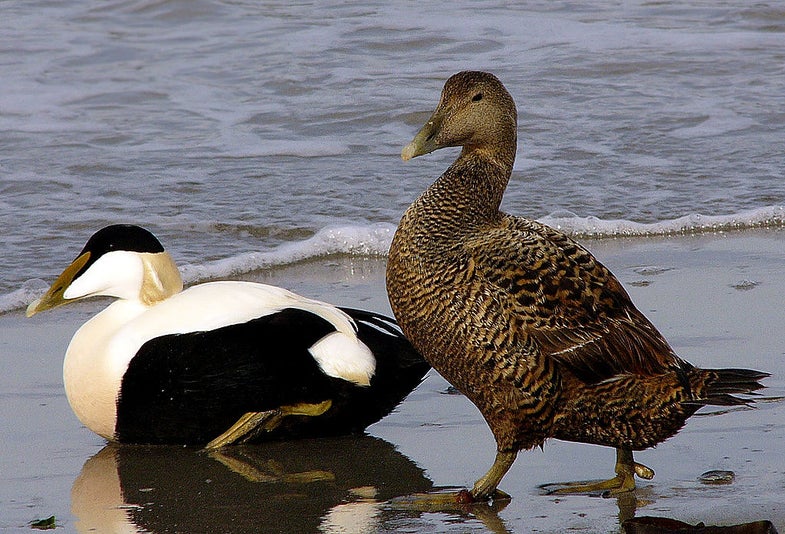 The mysterious cause of death for thousands of eider ducks in Massachusetts has been discovered, thanks to a team of scientists from three universities, the U.S. Geological Survey, and the U.S. Fish and Wildlife Service. Since 1998, dead eider ducks have been washing up on Cape Cod’s beaches from late summer to early fall, and no one could explain why—until now.

The pathogen is a new orthomyxovirus that falls into the same family as influenza, according to results of the study published by the Cornell Chronicle. Scientists have named it the Wellfleet Bay virus (WFBV) and shown it to be closely related to Cygnet River virus, which was recently discovered in some Australian ducks. According to Andrew Allison, lead author of the Cape Cod study and a postdoctoral fellow at the Baker Institute for Animal Health in Cornell University’s College of Veterinary Medicine, WFBV’s surface protein is consistent with other tickborne viruses, which may prove how the disease is being spread.

A community organization called SEANET helped to count and collect dead eiders for the study. They also served as the point of contact for beachgoers who spotted dead ducks, although the mass die-offs were hard to miss. “It’s pretty striking when you’re walking down a beautiful beach and suddenly you encounter 300 or so dead birds,” says Julie Ellis, a research assistant professor at Tufts’ Cummings School of Veterinary Medicine and executive director of SEANET.

Allison’s researchers sampled tissue from dead birds and grew cultures of the viruses they found present. Then they sequenced the genes of those viruses to compare with a database of viral genomes. “We isolated the virus repeatedly, over multiple years of outbreaks, and in many birds, which tells us the virus is definitely playing a contributing role and possibly a major role in the die-offs,” Allison said. However, he added that it’s likely there are multiple factors to blame. “Lots of the birds are emaciated, and lots have parasitic worms in conjunction with the virus, and it’s possible another factor like stress or migration may also play a role and trigger the deaths.”

While their findings suggest the virus is being transmitted among the birds by ticks, the ducks’ colonial lifestyle of gathering in large groups during nesting season likely makes that transmission all the more efficient. A small population of common eider ducks stays on Cape Cod year-round, but most migrate from their summer breeding grounds in northern New England and Canada to overwinter in Cape Cod each fall. Researchers are still not sure if the dead birds are visitors, year-round residents, or both.