File photograph courtesy of USFWS/Flickr There’s a new wolf in town—at least that’s what California Department of Fish and Wildlife... 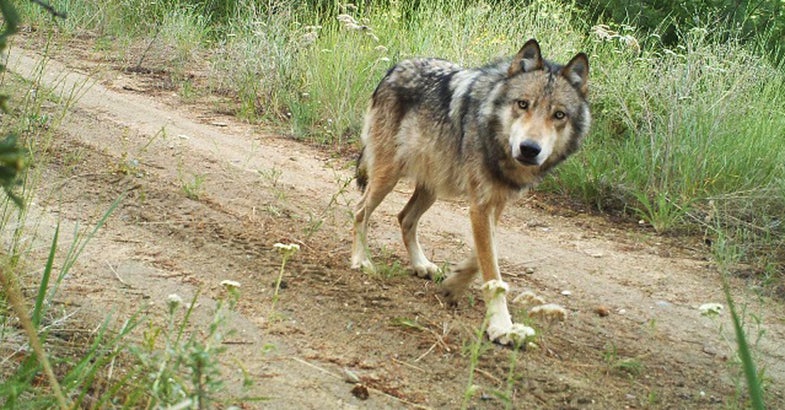 There’s a new wolf in town—at least that’s what California Department of Fish and Wildlife (CDFW) officials believe, after a lone gray wolf was spotted on camera roaming the Northern California countryside earlier this spring. As the Associated Press reports, if the animal captured in the photo (included below) is indeed a gray wolf, not a coyote or another canine, it will be only the second confirmed gray wolf in the state since the 1920s.

“The presence of this wolf in California is a source of hope and excitement for the recovery of the species, not just in the state, but across America,” Jamie Rappaport Clark, president and CEO of Defenders of Wildlife, told the AP.

Earlier this year, after the CDFW received reports of a large dog-like predator in the area, officials set up trail cameras to capture footage of the rogue canine. Now, based on the image, as well as track marks, the CDFW believes that the animal is, in fact, a lone gray wolf.

According to the CDFW, the species was hunted nearly to extinction in the 1920s, but in the years since has slowly recovered. Prior to this sighting, the only gray wolf documented in California was one that researchers were monitoring with a tracking device, but that wolf has since returned to Oregon. The CDFW has received multiple reports of gray wolf sightings over the years, but all have ended up being coyotes, dogs, or other such canines, except for this newly-spotted wolf and the monitored Oregon wolf.

The recent sighting is encouraging for those who support the wolf-recovery efforts in the West. The CDFW states on its website that the department did not reintroduce the wolves, and also specifies that the animals pose little threat to humans. Gray wolves are protected in California and on the federal level as an endangered species.