Rangers and law enforcement personnel near Jackson, Wyo. had their hands full during the early-morning hours of May 1st as... 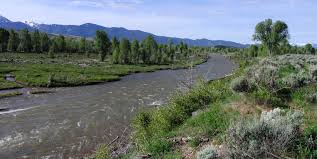 Rangers and law enforcement personnel near Jackson, Wyo. had their hands full during the early-morning hours of May 1st as shed hunters trying to distance themselves from one another in the opening moments of the area’s popular season attempted to cross the dangerously high Gros Ventre River, only to be swept away or capsized. While there were no human fatalities reported, one horse drowned.

According to an article from the Salt Lake Tribune, the river was running fast-and-high from early snowmelt, but that didn’t stop people from trying to cross it in rafts and on horseback to be one of the first inside the Bridger-Teton National Forest after the antler-hunting season began at midnight.

Two boats were swept downstream but the occupants were later found safe. Another boat carrying five people flipped. Three people clung to the boat and made it to shore, the fourth crawled onto a dry gravel bar, and the fifth climbed a few feet onto a rocky cliff. Grand Teton National Park rangers rescued the three stranded boaters who were cold but otherwise uninjured.

The annual antler-gathering event has grown in popularity over the years, largely because of the high market value of sheds. (Some matching sets sell for thousands of dollars.) While antler hunters aren’t allowed on the Grand Teton and National Elk Refuge where thousands of elk reside through the winter, they can access the adjacent national forest beginning May 1st. Each year, antler hunters arrive at the park early on April 30th and sprint for the forest border as soon as the clock strikes midnight, but they have to cross the Gros Ventre River to get there.

A streamflow gauge estimated the river’s volume was about twice what it historically runs at during the same time period.