Six-year-old Blake White of Houston, Texas, has a fish story to last him a lifetime after he snagged a great... 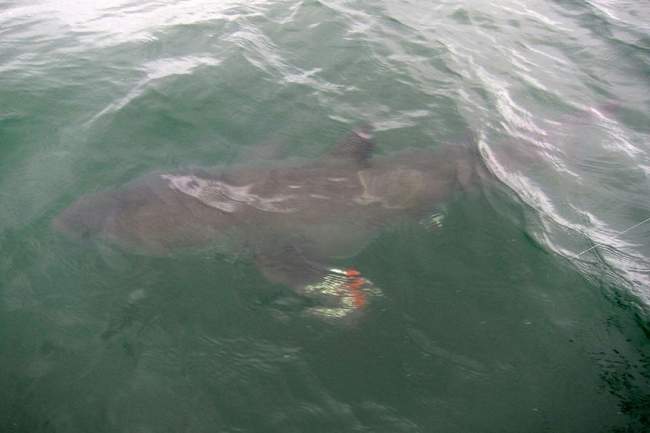 Six-year-old Blake White of Houston, Texas, has a fish story to last him a lifetime after he snagged a great white shark in Cape Cod Bay last Saturday. According to the Cape Cod Times, Blake; his brother Pierce; and his parents, Lars and Niccole, were fishing with their grandparents when Blake hooked what the family thought was a large striper.

The fish proved too big for Blake to reel in, so, according to Lars White, they followed it in the 22-foot center-console boat, reeling slack line as they went. After an hour, they finally saw the fish—which looked to be about 10 to 12 feet long. Lars White couldn’t resist quoting Jaws: “We’re going to need a bigger boat.”

After snapping a few photographs, the Whites cut the line, and the shark swam away. The Whites sent the photos to the Atlantic White Shark Conservancy, which confirmed that the shark was indeed a great white. Gregory Skomal of the Conservancy says that great white shark sightings have increased around Cape Cod in recent years, but most of the sightings have been on the ocean side of the cape. This shark was hooked well inside Cape Cod Bay.

As for Blake White, he is excited about going fishing again but, he told the Cape Cod Times, “Maybe we can catch something a little bit smaller.”