Dozens of animal control and law enforcement officers in Hot Springs, Arkansas had their hands full a few weeks ago... 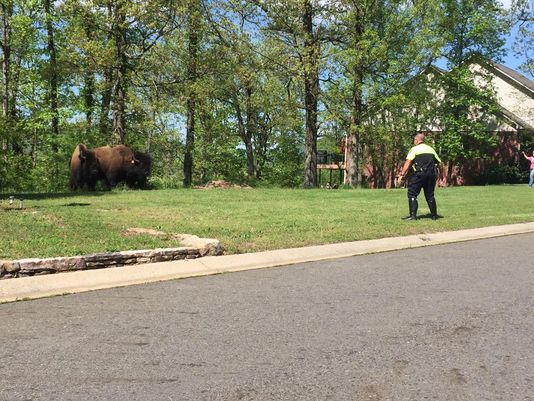 Dozens of animal control and law enforcement officers in Hot Springs, Arkansas had their hands full a few weeks ago when a small herd of buffalo escaped from a local farm and ran amuck through neighborhoods and down city streets.

A story from CBS affiliate KTHV says the animals somehow got out of their pen sometime during the night of April 15th, and that around 4 a.m., authorities were made aware of the situation when dispatch received a call that someone struck a buffalo with their car.

“We have had an occasional cow escape within the city limits but this is my first experience with a buffalo issue,” said Corporal Luzader with the Hot Springs Police Department.

Aside from the car that collided with one animal, it doesn’t appear the buffalo caused any serious damage. However, once the herd tasted freedom, they refused to cooperate with anyone attempting to corral them. It took two days, but officers were eventually able to either recapture or tranquilize all the buffalo and return them to the farm from which they escaped.

“I haven’t heard of any significant damages. The vehicle was towed from the scene, the driver walked away but other than that the reports could still be coming in,” said Luzader. “It’s not every day in central Arkansas you see buffalo, let alone roaming your own street up here. It’s just kind of odd.”