Snake Expert: 16-foot Anaconda On the Loose in New Jersey

A big snake is on the loose in New Jersey. According to a reptile expert talking with NJ.com, what was... 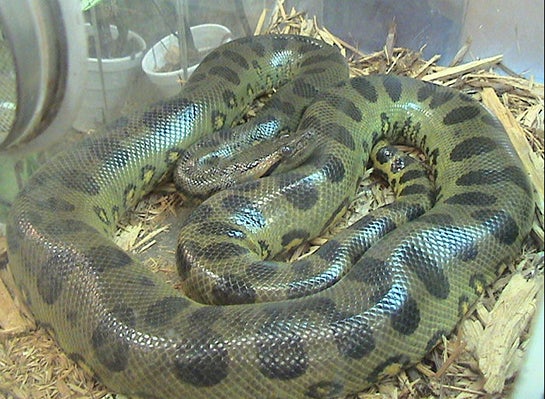 A big snake is on the loose in New Jersey. According to a reptile expert talking with NJ.com, what was originally reported to be a 15- to 20-foot boa constrictor roaming Lake Hopatcong, might actually be a green anaconda—one of the largest, most aggressive snakes in the world.

Lake goers first spotted the snake several weeks ago and speculated it was a boa constrictor released after it became too large for its owner to care for it. Since then, authorities received several other sightings from residents and issued an alert, though expert Gerald Andrejcak believes the situation is worse than officials suggest.

“It’s a green anaconda,” Andrejcak said. “I’ve known its species [since last week], but I was sworn to keep my mouth shut by local officials to avoid causing a panic. Now that there’s a panic, I’m going on the record.”

Andrejcak, who has a zoology degree and 20 years of experience handling and breeding large snakes, says he told animal control officer Dale Sloat that they were looking for an anaconda—not a boa—after hearing reports from witnesses, and that Sloat asked him not to disclose the species. Aside from an email sent to a reporter last Tuesday, Sloat has declined further comment.

“So far we have been told there were sightings, but no pictures. In the boat house the owners say they saw it the night before and called in the morning. The snake either was never there or it was gone before we got there,” Sloat wrote. “No officials have seen this snake, and you know how people exaggerate.”

Adrejcak says he confirmed it was an anaconda last Thursday, when he saw the snake inside a lakeside boathouse and estimates the length to be about 16 feet with a head the size of a large hand. It escaped and animal control officers have been unable to spot it again.

Green anacondas are one of the largest snakes in the world and can grow to be over 30 feet long and weigh more than 550 pounds. It’s unknown whether there is more than one snake in the lake, or if the snake is pregnant or has givenbirth, since anacondas are “live-bearers” and don’t lay eggs, though Andrejcak says he’ll be able to determine answers to most of these questions once the snake is caught.