Late last month, three good samaritans on snowmobiles riding outside Anchorage, Alaska, came to the aid of a cow moose... 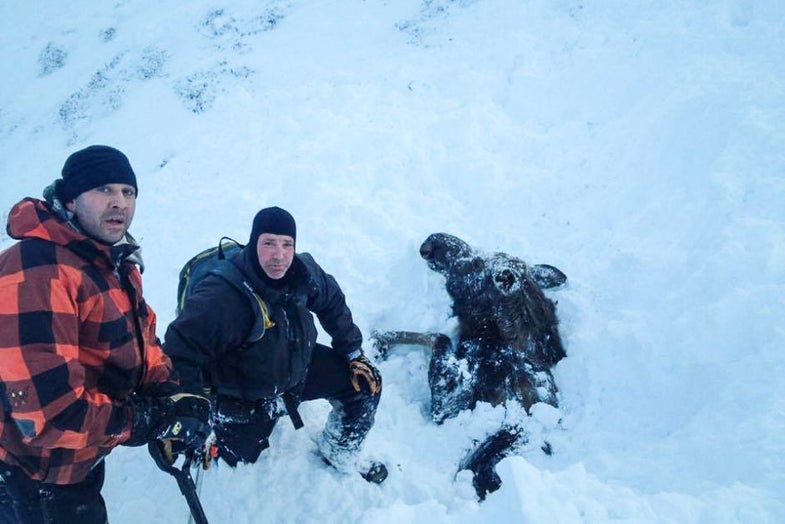 Late last month, three good samaritans on snowmobiles riding outside Anchorage, Alaska, came to the aid of a cow moose that was partially stuck in a fresh avalanche on the side of a hill.

According to a story from the Alaska Dispatch News, friends Marty Mobley, Rob Uphus, and Avery Vucinich were riding in an area known to locals as “God’s Country,” and were extremely wary of avalanches. Along the way, they noted two sets of tracks that crossed their path, one set belonging to a skier and the others belonging to a moose. When they returned an hour later, an avalanche had covered most of the tracks.

The men were concerned for the skier, who they thought might still be in the area, and when they looked up the hill, they saw something sticking out of the snow. “It looked like a guy’s arm at first because we were expecting to see a skier,” Mobley said. “But it was moaning and groaning and moving and we realized it was a moose, even though only his ears and some of its snout was sticking out of the snow.”

The men used their shovels to dig around the moose, which Mobley said didn’t move an inch while they worked, and actually seemed to grow calmer as they moved snow away. “It didn’t even fight us,” he said. “It was totally docile and let us touch it. It just [lay] there.”

After about 10 minutes of digging, most of the moose’s body was uncovered and the animal was able to stand up on its own. “It stood right up and towered over us, because we were in kind of a hole from the digging,” Mobley said. “It looked like the abominable snowman because its fur was so packed with snow and it looked at us, shook the snow off it, and off it went.” The moose ran down the mountain, showing no apparent signs of injury.

“I am an animal lover, and I couldn’t leave it there,” Mobley said. “Besides, we deal with a lot of avalanches and a lot of snow. That kind of karma is something we don’t pass up.”