Two South Dakota bowfishermen have each broken the state’s longnose gar archery record—in a matter of just four days. On... 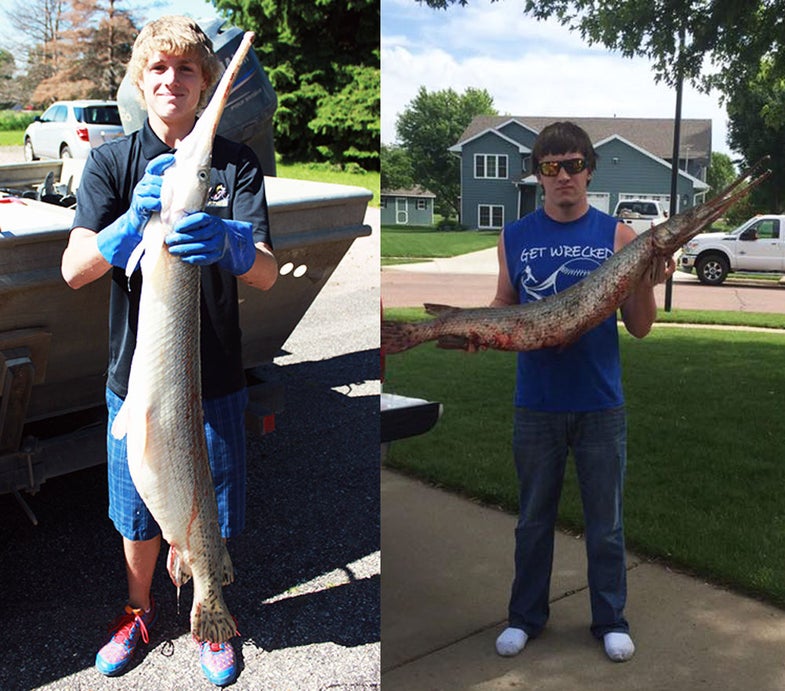 On Memorial Day, Hunter Rockne claimed the first fish, a 23-pound 14-ounce giant, which broke the old record by more than 3 pounds. He was bowfishing at a popular spot on the James River, near Yankton, S.D.. He passed on opportunities to arrow carp, hoping that a big gar was lurking nearby. His intuition paid off—the record fish showed itself at just 5 yards. His first shot was lethal, but the weight of the fish and the river current caused the arrow to come loose. Rockne made a swift follow-up shot and pulled the gar to shore before the river could carry it away. Since it was a holiday, Rockne was unable to reach a biologists to verify the record. Instead, he stored it on ice overnight, until he could get the fish officially weighed and identified.

Then on June 3, Riley Stanga was bowfishing in the same stretch of river where Rockne had claimed his record when he shot a 24-pound 2-ounce longnose gar, besting Rockne’s.

Stanga said that he was just looking to arrow some carp on the trip, and as soon as he’d reached the river, he’d spotted a large school. He surveyed the group to find the biggest one—but among them was a giant gar, which he decided to target instead. After one well-placed shot, the record was his.

Stanga has a history with big gar from this area: This was the second longnose that he’s shot weighing more than 20 pounds; his first fell just short of beating the old record. This time around, Stanga knew that his haul had more than enough heft to nab the record when he hoisted it from the river.

Both fishermen buried their record catches, with no plans of getting them mounted. “I put mine in my mom’s garden because I’ve heard they’re great for the soil,” Rockne said.