Photograph via Queensland University of Technology/Erika Fish The COTSbot, a robotic weapon designed to help save Australia’s Great Barrier Reef... 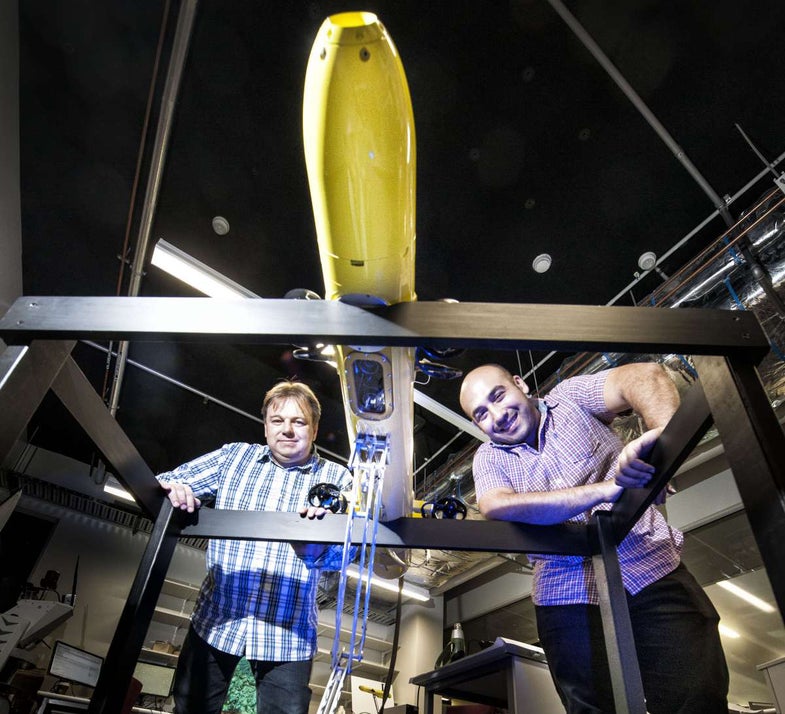 The COTSbot, a robotic weapon designed to help save Australia’s Great Barrier Reef from a destructive crown-of-thorns starfish, recently completed its first sea trials. According to Daily Mail Australia, the submersible starfish killer will prowl the reef for eight hours at a time. When the COTSbot’s vision system identifies a starfish, the robot will target and deliver a lethal injection of bile salts to kill it. The COTbot can carry enough toxin to poison 200 starfish per patrol.

Developed by Matthew Dunbabin and Feras Dayoub, of the Queensland University of Technology, the COTSbot will be tested against live targets this month, and if that trial is successful, the robot will go into action in December. “Human divers are doing an incredible job of eradicating this starfish from targeted sites,” Dunbabin told Daily Mail Australia, ”but there just aren’t enough divers to cover all the COTS hotspots across the Great Barrier Reef.”

The crown-of-thorns starfish feeds on corals. In a healthy ecosystem, the starfish serve an important role reducing the fast-growing corals, which then allows slower-growing corals to compete. However, changes in water temperature or water quality can lead to crown-of-thorns outbreaks, which can then destroy a reef. Floods washing large quantities of nutrients off the land into the ocean during the starfish’s spawning season can boost populations to the point that they become a danger to the reef ecosystem. Major outbreaks occurred from 1978 to 1991, from 1993 to 2005. The current outbreak began in 2010. Scientists estimate the crown-of-thorns are responsible for up to 40 percent of the Great Barrier Reef’s loss of coral cover.

“The COTSbot becomes a real force multiplier for the eradication process the more of them you deploy,” Dunbabin said. “Imagine how much ground the programs could cover with a fleet of 10 or 100 COTSbots at their disposal, robots that can work day and night and in any weather condition.”

Currently, the Australian government uses two teams of divers working year round, ten days on, four days off, to poison the starfish and save the reef. The COTSbot’s designers hope that if their invention succeeds, divers will need to come in only after the COTSbot clears an area to mop up the few surviving starfish.