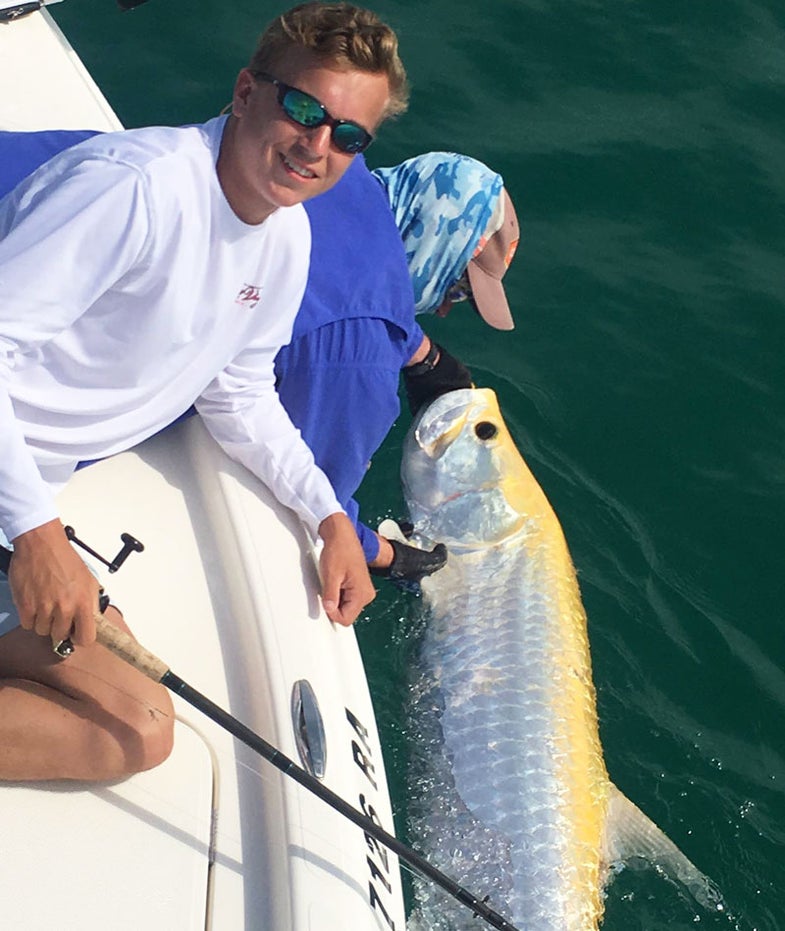 Last week, Will Chapman (white shirt) caught a special so-called golden tarpon in Florida. The fish has a golden back, earning it the moniker.. Flyliner Charters, Inc/Facebook
SHARE

Tarpon can grow to weigh more than 250 pounds and live as long as 80 years. For 16-year-old Will Chapman, however, size or age had nothing to do with his recent trophy. According to the Bradenton Herald_,_ Chapman caught what appeares to be a so-called golden tarpon.

It happened last week in Florida, when Chapman was fishing deep for tarpon hugging the bottom. Will’s father, Mark Chapman, told reporters that it took 10 minutes before they realized that Will had hooked a special fish. “Will said the fish looked like a giant koi,” Mark said. “It was absolutely beautiful once he got him near the boat; the tips of his pectoral fins were lit up bright blue similar to a pelagic.”

The resemblance to koi was ultimately what made this a unique catch. Most tarpon are silver along the sides and belly, and have darker shades of blue and black down their back. But Chapman’s fish had a light golden back that was uniform in shade.

Captain Patrick Dineen, who skippered Chapman’s charter, said that he’s never seen a tarpon with coloration such as this before. “Wherever the pigmentation was, it was golden,” Dineen said. “All the silver parts were almost white. …My God, was it beautiful.”

The fish, which Will released, is similar to another Florida tarpon caught by captain Clark Wright in 2014. That fish had a comparable golden sheen that caught Wright’s attention when it rolled. “In my 20 years of tarpon fishing, I’ve never seen a tarpon like this before,” Wright told Sport Fishing.

Kathryn Guindon, an assistant research scientist at the Florida Fish and Wildlife’s Tarpon Genetics Recapture program, told Sport Fishing that Wright’s fish was a piebald tarpon, meaning it has patches of unpigmented scales. Such fish were once called albino; in fact, Guindon said a similar fish hangs in the American Museum of Natural History labeled as an albino tarpon.

It stands to believe that Will Chapman’s tarpon may have also been a piebald, or albino, tarpon.