Teen Harvests Largest Buck Ever Taken by an Oklahoma Female

Photograph via M.Millard/Facebook Micalah Millard didn’t have a trophy buck in mind when she headed out to hunt on her... 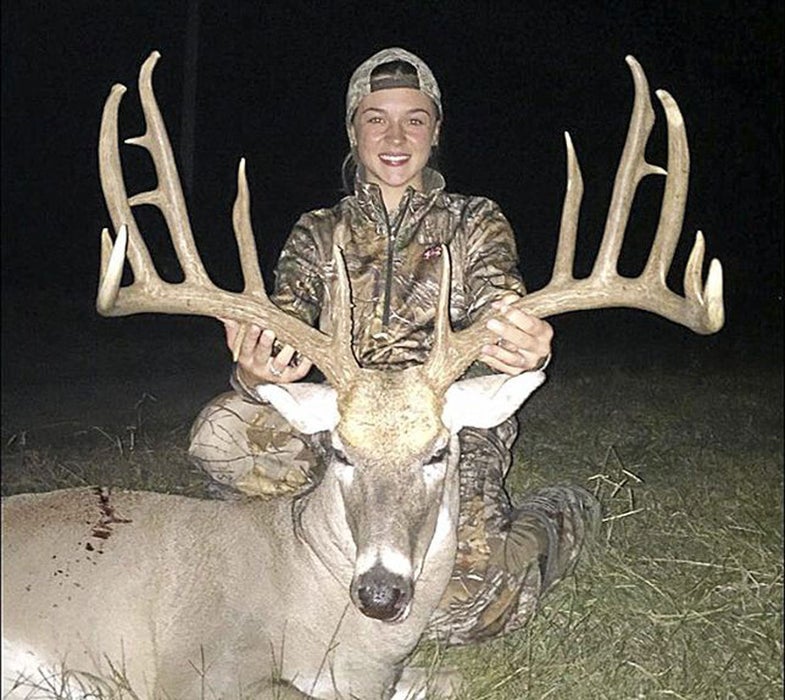 Micalah Millard didn’t have a trophy buck in mind when she headed out to hunt on her family’s ranch in McIntosh County, Oklahoma, during the state’s youth hunt last weekend. Yet Millard bagged one of the state’s largest-ever bucks, and the state’s highest-scoring typical whitetail tagged by a female. According to the 14-year-old, luck must have been on her side, as the buck had never been seen on the property until the day she pulled the trigger.

Millard, who has been hunting since she was six years old, participated in the youth hunt with her dad. Saturday morning, the two set up a stand in an area rarely hunted on the property after they checked a trail camera and found photos of the giant buck in the area.

Patiently, the pair hunted from the stand all morning and then returned in the late afternoon. Shortly thereafter, they spotted the buck trailing several does. Millard’s dad lost his cool upon seeing the deer, Millard says. “He was as close to yelling as you can get in a whisper,” she told Newson6.com. “He was that excited. I guess I didn’t really get that excited because I thought I was gonna miss.”

But Millard didn’t miss; she shot the 12-pointer twice at 125 yards, hitting it in the vitals and through the base of the neck. According to TulsaWorld, the buck’s antlers green-scored at 187 1/8 inches and have a 12-point mainframe rack with a 24-inch inside spread, and “relatively few imperfections.” Based on the current state records, Millard’s buck will most likely be Oklahoma’s fourth largest typical whitetail ever tagged. (The state’s largest measures 194 inches and was harvested in 2007.)