Photo via Maxx Tissenbaum/Twitter Last week a Florida minor-league baseball team took to the field for pre-game drills but quickly... 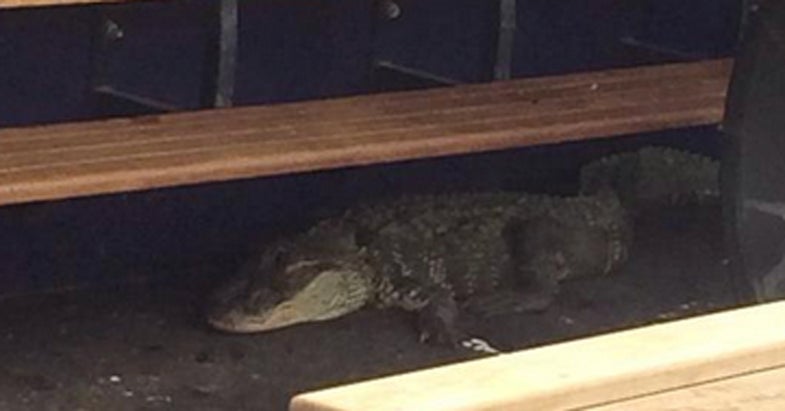 Last week a Florida minor-league baseball team took to the field for pre-game drills but quickly abandoned their warm-ups when they spotted a 10-foot-long alligator beneath a dugout bench.

The New York Post reports that the Charlotte Stone Crabs, a single-A affiliate of the Tampa Bay Rays, returned to their home field last Friday after a brief trip to discover the reptile lurking in the visiting team’s dugout. Rather than keep their distance, a few players snapped close-up photos of the gator and posted quips to their social-media accounts. “So the visiting team brought a secret weapon…a ten-foot alligator just chilling in the dugout,” wrote Stone Crabs catcher Maxx Tissenbaum.

It’s believed that the gator made its way through an empty outfield gate while the team was traveling; however, the gator didn’t get to stay to enjoy the game: Charlotte County Animal Control was able to secure the animal’s jaws, transport it to a nearby pond, and release it.

*An earlier version of this story noted that the Charlotte Stone Crabs are a North Carolina-based team, when, in fact, they hail from Port Charlotte, Florida. We regret the error.