On Friday the 13th, a day often regarded as the unluckiest of the year, Tennessee angler Gabe Keen had luck... 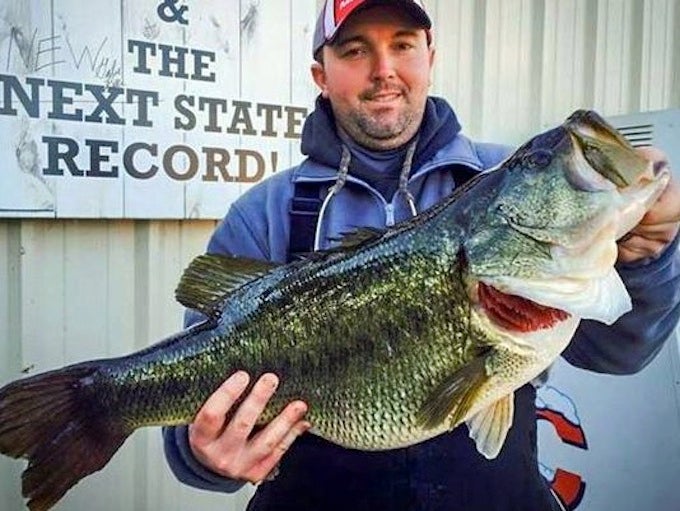 On Friday the 13th, a day often regarded as the unluckiest of the year, Tennessee angler Gabe Keen had luck on his side, when he hooked a 15.2 pound largemouth bass from Chickamauga Lake. Pending official verification from the Tennessee Wildlife Resources Agency, Keen’s fish beats the 60-year-old state record by slightly less than a pound.

Keen told ABC affiliate WTVC he had been fishing the Chester Frost Park area of the lake, practicing for an upcoming tournament. Just before noon, a big fish struck his umbrella-style rig about halfway through a retrieve. “I was sitting in about 20 feet of water just slow rolling it off a bank,” he said. After the strike, getting the record-breaking bass into the boat didn’t take very long. “He came in pretty good at first and then after two little surges he came right on into the boat… took one last little tail flip at the boat and I got him in.”

Keen weighed the fish, but knew he had to get back to shore and weigh it again on certified scales if he was going to have any shot at beating the state record. He made his way to a nearby grocery store and was able to officially certify the fish as a 30-incher weighing 15.2 pounds. The previous state largemouth record, set by James “Logue” Barnett in 1954, was 14.5 pounds.

Keen only wishes he’d been able to connect with a bass of this size during a tournament, and he remains convinced that there’s another potential record in the lake, which is stocked with Florida bass fingerlings. “With the weights we’ve been seeing come from the lake, a lot of people felt it was just a matter of time,” biologist Mike Jolley says of the record catch. “There is no way to know for sure until we run a DNA analysis, but I would bet this fish will be a cross between one of the Florida largemouth bass and a native northern largemouth.”

Keen was greeted at the Dayton Boat Dock and Grill with congratulations from a crowd of people craning to see the big bass. The area has been billing itself as the new “fishing capital of the south,” and a hopeful sign on the wall outside the restaurant reads, “Home of the next state record.” Keen scratched out the word ‘next’ and replaced it with the word ‘new.’

“For something like this to happen to me, it’s still sinking in,” Keen said. “But I’m tickled. I couldn’t be happier.”