A 15-year-old Tennessee angler recently tangled with the trout of a lifetime—an 18-pound 8-ounce rainbow trout that was big enough... 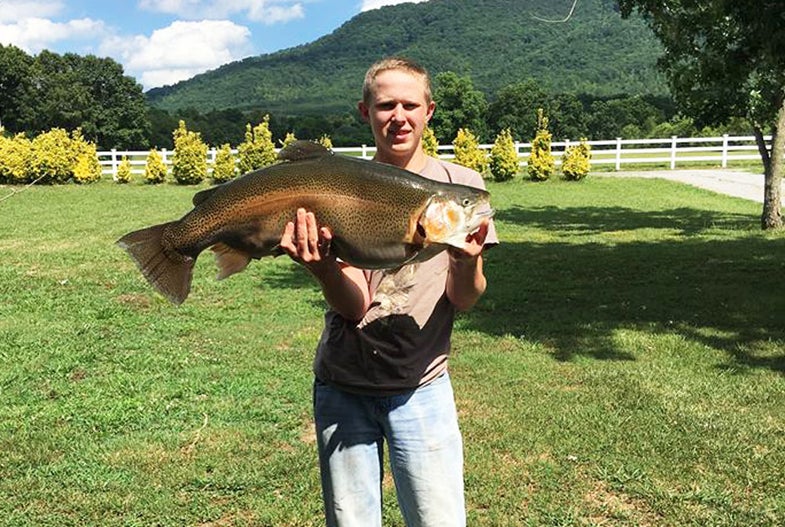 A 15-year-old Tennessee angler recently tangled with the trout of a lifetime—an 18-pound 8-ounce rainbow trout that was big enough to beat the state record by nearly 1.5 pounds.

According to The Chattanoogan, the Tennessee Wildlife Resources Agency (TWRA) confirmed that the 32-inch-long trout, caught by John Morgan in Polk County on Friday, is large enough to best the state’s record: a 16-pound 15-ounce fish caught in 2002.

Morgan said that he happened on the fish, which resided in a farm pond owned by his grandfather’s friend, purely by accident. Initially, he was there to help remove a snapping turtle, but was told to bring a fishing rod. Within 45 minutes, Morgan caught the turtle and a few fish and decided to fish for 10 more minutes before returning home. That’s when the record-sized rainbow latched on to the end of his line and didn’t fall off the hook, even after a 20-minute battle.

“We’re very excited for this young man to find himself in the record book,” said TWRA Region 3 fisheries program manager Mark Thurman. “With so many records being broken these days, we look forward to seeing what the next state record fish is.”

Morgan says he fishes several days a week and didn’t waste any time dropping off his trophy at a local taxidermist. “I just love being outside, hunting and fishing,” Morgan said.