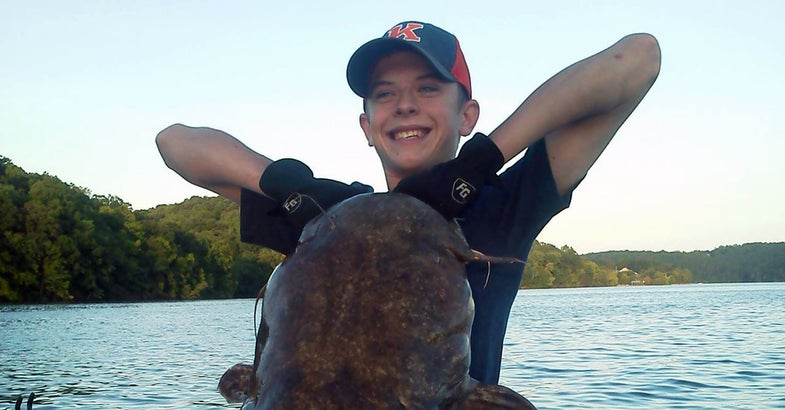 In late July, a Tennessee teenager Troy Powers hooked and landed what’s likely to be a state-record flathead—a fish estimated to weigh around 100 pounds—while fishing Watts Bar Lake. That’s about 15 pounds heavier than the current state record set in 1993. Powers, however, decided to release the fish rather than risk injuring or killing it in order to get the certification needed for it to be declared the new state record.

According to The Tennessean, Powers, 16, of Kingston, Tenn., was fishing with his father, Mike, and their neighbor Derrick Stafford from a pontoon boat over an underwater drop-off and using shad as bait. As soon as Powers hooked the fish, he said he knew it was a big one.

“Ever time the fish ran, I held on for dear life,” he told reporters.

It took Powers 20 minutes to reel the fish to the boat, at which time the three anglers realized it was too big to fit in their net. Thankfully, the fish made its way to the vessel headfirst, so they reached down and lifted it aboard by hand. After photographing and measuring the fish— which at 5 feet 9 inches was as long as Powers is tall—the anglers released the trophy back into the lake.

Local wildlife officials estimate the fish was about 20 years old based on Powers’s photos and were glad to hear it was returned it to the lake. Powers, who says he only keeps crappie, admits it was not an easy call. “It was a hard decision to make,” he said. “The catfish was older than me. It felt good to just see it swim off and have a chance to grow and get bigger.”