Photograph courtesy of USFWS Mountain-Prairie With the start of the fall waterfowl migration, nervous poultry owners are keeping an eye... 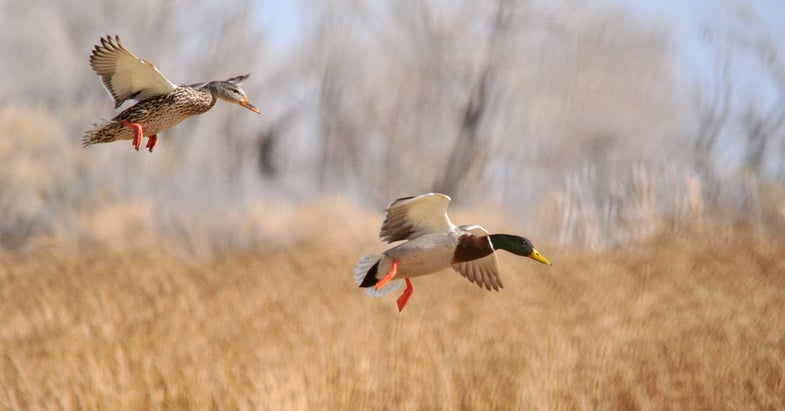 With the start of the fall waterfowl migration, nervous poultry owners are keeping an eye on domestic chickens, ducks, and turkeys, as the U.S. Department of Agriculture warns that another round of Highly Pathogenic Avian Influenza—or bird flu—might be just around the corner. Last spring, two deadly bird flu strains—H5N2 and H5N8—wiped out nearly 50-million domestic birds across the country, and officials anticipated that the next outbreak will occur either this fall or early next spring. The virus is spread through secretions of migrating waterfowl, meaning that the virus could show up anywhere they land or fly over. Though all waterfowl could be carriers of bird flu, scientists have pinpointed wild ducks as the main culprits.

Minnesota was one of the states hit hardest by the spring outbreak. According to a report by Minnesota Public Radio, more than 9 million birds on more than 100 poultry farms were affected—and killed—by the virus, leading to a massive cleanup effort and the temporary shutdown of many area poultry farms and processing plants.

Because of bird flu’s impact across the state, researchers at the Minnesota Department of Natural Resources began collecting samples from wild ducks shot by hunters last weekend in an attempt to track the spread of the virus. So far, nearly 500 samples have been taken, but biologists would like to sample at least 800 ducks in all. The state’s participation in monitoring waterfowl is part of a nationwide effort to curb the spread of bird flu to other large commercial poultry-producing states, according to The Chippewa Herald.

“We are kind of now edging into the beginning of the major migratory period. … This is really the first opportunity we as a country will be able to get a significant number of samples,” says Hon Ip, a microbiologist for the National Wildlife Health Center in Madison, Wisconsin, where the samples are being tested. Since December, the virus has been traced to only 100 wild birds, with only two of those birds found in Minnesota.

Lou Cornicelli, MDNR’s wildlife research manager, says that hunters have been incredibly cooperative and that most of the samples have been collected in the seven Minnesota counties hit hardest by bird flu last spring.

With much of the migratory season ahead, hunters should keep an eye out for sick birds and report any sightings of them to local authorities. This will help researchers monitoring the impact of bird flu by allowing them to track the spread of the virus.