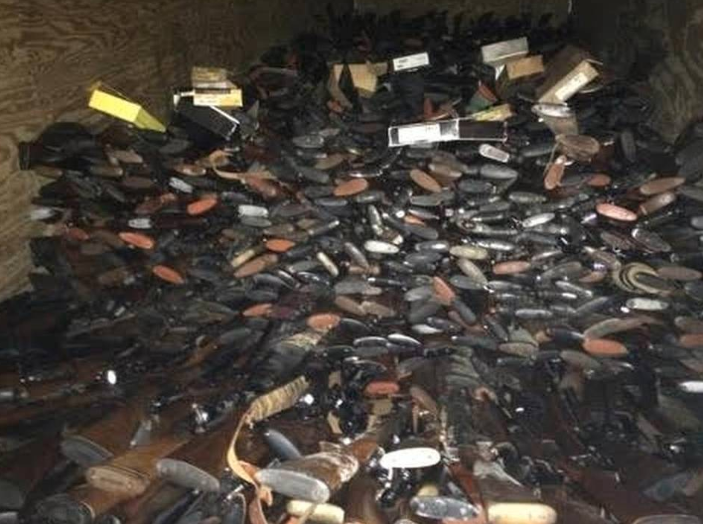 Lat week law enforcement in South Carolina found “literally thousands” of guns—most of which were likely stolen—packed into a house in Pageland, S.C.. The Chesterfield County Sheriff’s Office estimates that the number of guns found at the home of Brent Nicholson, 51, was between 7,000 and 10,000. Sheriff’s deputies also found fishing tackle, archery equipment, some 500 chainsaws, and several mounted deer and elk heads. “There were so many guns we quit counting after a while,” Sheriff Jay Brooks told The State. Authorities loaded the confiscated goods into four 40-foot tractor trailers for transport to an armory near the sheriff’s office.

Deputies made the discovery on Friday when they came to the residence to serve Nicholson, who has a lengthy criminal record, a subpoena for a different matter, at which point they noticed chainsaws and welding equipment in the yard that they recognized as having been reported stolen. Deputies returned with a search warrant and found guns throughout the house and in a storage shed on the property. Furthermore, a search of the liquor store Nicholson owns with his father and of Nicholson’s parents’ home turned up hundreds of more firearms. Brooks says that “99.9 percent” of the guns were hunting rifles and shotguns, and believes many were stolen from hunting cabins throughout the region. Nicholson may have stolen some of the firearms himself, but Brooks says he probably bought most of them from burglars.

The South Carolina Law Enforcement Division plans to have 20 agents help process the stash to determine what has been stolen in an attempt to return the property to its rightful owners.

“This investigation is far from over,” said Brooks, who anticipates more arrests in the case.