Photograph via MDWFP. Ronnie Clifton(left) and Kennie Crechale. In less than 24 hours this week, three state alligator records were... 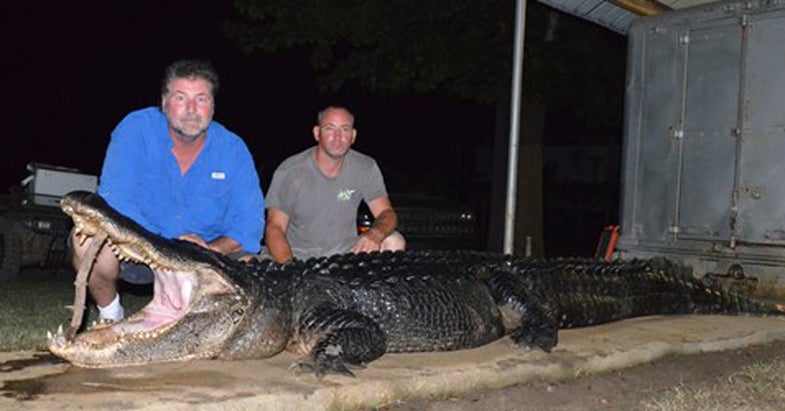 In less than 24 hours this week, three state alligator records were wiped out by serious Mississippi hunters and their incredible—and hefty—harvests. And according to the Mississippi Department of Wildlife, Fisheries, and Parks (MDWFP), there could still be more of these gargantuan gators out there.

Weighing in at 319 pounds, an alligator harvested by Craig Jones, of Mendenhall, Miss., beat the previous heavyweight female record by 24 pounds.

“The length was right there at the record, but we knew it was big,” Jones, initially unsure about the size of his catch, told The Clarion-Ledger. The fight lasted nearly two hours, and once the exhausted crew wrangled the gator onto the boat, they knew it was a record.

In response, MDWFP program coordinator Ricky Flynt said, “Though it is not as massive and impressive as the large male gators, this is a very significant specimen. The largest female alligators ever officially recorded are 10 feet 2 inches long—one measured in Florida, in 1984, and one in Mississippi, in 2009.”

The official measurement and weight of Jones’s alligator came in at 9 feet, 11 inches, and 319 pounds.

At about that same time, a few miles down the Mississippi River, three other hunters were busy breaking records. Clayton Gibson, of Natchez, Miss. hauled in a massive 822-pound gator, crushing the record for heaviest male. Likewise, later that day, officials certified a 13-foot, 7¾-inch gator killed by Angelia Rivers as the longest male specimen killed in the state.

But then even later that very day, officials verified an 826-pound, 14-foot male gator shot by Kennie Crechale and Ronnie Clifton that broke both records set earlier that afternoon. Cechale’s gator was harvested using a rifle, which is permitted when hunting alligators on private land, rather than the hook and line.

Program coordinator Flynt says that he’s not surprised by the size of the gators and told The Clarion-Ledger, “I feel like, just as in years previous, it’s not over yet. There are a lot more alligators out there that can break the record, so I wouldn’t be surprised to see it broken later today or tomorrow.”

Hunters still have time to get their names in the books. Mississippi alligator season on public land closes at noon September 7 and on private land at 6 a.m. September 21.