Photo via Twitter/Jason Wagar Last week citizens of Toronto created a memorial for a dead raccoon after animal services failed... 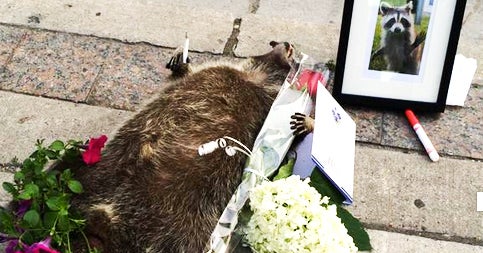 Last week citizens of Toronto created a memorial for a dead raccoon after animal services failed to remove it from a sidewalk in the middle of downtown, as WGNTV reports. Part sarcastic protest to the city’s slow response, part macabre joke, part genuine sympathy, the shrine went viral during the 14 hours between the time the raccoon was reported and when city workers finally collected it.

The saga began when Jason Wagar saw the raccoon on his way to work and alerted animal services about the animal via Twitter around 9:00 in the morning. At noon, the animal was still there, and someone placed a note next to it that read: “Rest dear raccoon, help is on the way from the city.” Four co-workers in a nearby building then bought a get-well card and a rose, put a picture of a raccoon in a small frame, and set the items around the dead animal.

Throughout the day, the memorial grew as people added flowers, candles, cards, and a donation box to the makeshift memorial. Likewise, residents gave the raccoon its own hashtag (#deadraccoonto) and a name (Conrad). Toronto City Councilor Norm Kelly took to Twitter to publicly prod animal services to clean up the animal.

Finally, a van arrived at around 11:00 p.m. to dispose of the remains. As a small crowd watched, one worker put the corpse in a garbage bag and said, “Seriously guys, it’s a dead raccoon.”

While Councilor Kelly and others tweeted eulogies for the dead raccoon, Jason Wager—who issued the original tweet about the animal—tweeted again to suggest that, in lieu of flowers, the raccoon’s family had requested donations to be made to the Toronto Wildlife Centre, which focuses on urban wildlife rescue and rehabilitation. A fund has since been set up in Conrad’s name.