Photograph via Queensland National Parks/Facebook In late October, Sandy Bell and her son were visiting the Rinyirru National Park, near... 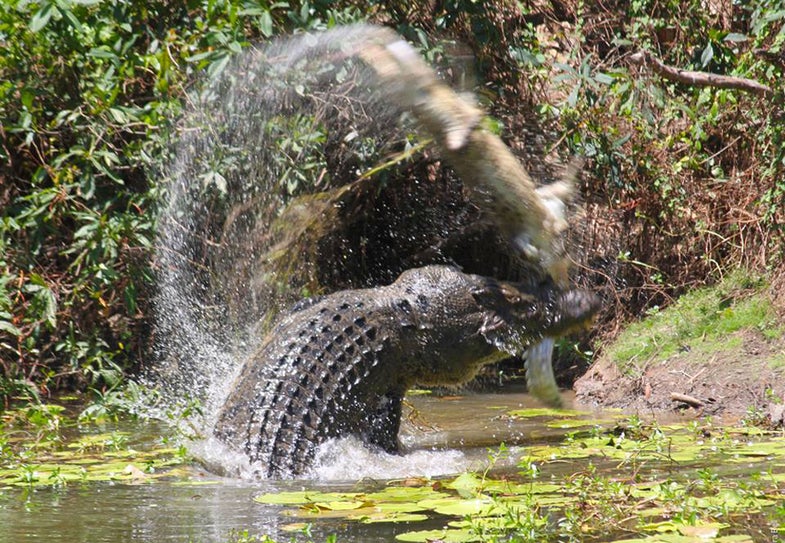 In late October, Sandy Bell and her son were visiting the Rinyirru National Park, near Cooktown, Australia, when they stopped to photograph two crocodiles lying nearby. As Bell snapped pictures, one croc began attacking the other, and the battle quickly escalated into a deadly feast just 65 feet from Bell’s lens. “The bigger crocodile was sitting in the water, and the littler one was sitting on the edge of the bank,” Bell told the BBC. “Suddenly, the bigger one grabbed the smaller one and flung it up into the air. Then it started eating the tail, and then the legs. Just… chomp, chomp, chomp.”

According to the BBC interview, Bell couldn’t help but feel thrilled and horrified about what she was seeing. “When this massive crocodile reared out of the water, it was pretty special to see,” she says. “The head just looked monstrous. All I could think was [that] you can see how easy it is for animals or people to get taken by a crocodile because it was so ferocious and strong and powerful.”

Male crocodiles can be territorial during the mating season, which is right now. Also, according to the Associated Press, it’s possible that the smaller croc was already injured or dead when the larger croc initiated the fight and the feast, which lasted between 10 and 15 minutes.

In late November, Queensland National Parks shared Bell’s photos on its Facebook page, with tips for ‘How to be croc wise,’ and the post quickly took off. “I started getting these emails from friends,” says Bell, “then I jumped on Facebook and went, ‘Oh my gosh. This is a lot of attention.’”