On January 8, Idaho angler Larry Warren caught and released a 28-pound rainbow trout from the Clearwater River near Orofino.... 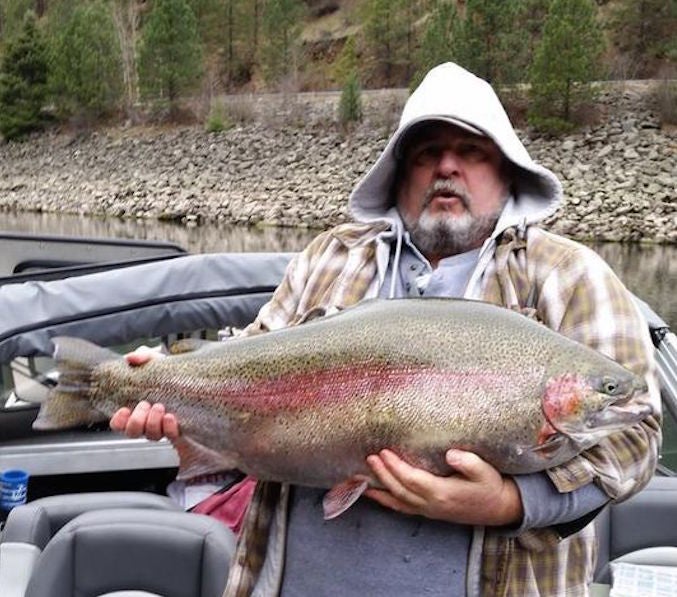 On January 8, Idaho angler Larry Warren caught and released a 28-pound rainbow trout from the Clearwater River near Orofino. It was a fish big enough to best the current state record—set in 2009—by 8 pounds, if it weren’t for a few “technical” circumstances governing the handling of wild fish and how the state evaluates records. Many news outlets are running headlines about the release of this record-sized fish, but few are explaining the regulations that mandated Warren’s actions. In an exclusive interview with F&S, the Idaho Fish and Game Department’s Clearwater Region fishery manager, Joe DuPont, clarified the situation.

While DuPont believes Warren’s fish was indeed a trout, the fact that the angler released the fish before weighing it on a certified scale bars the fish from record consideration. But, according to DuPont, Warren didn’t have a choice—the fish had an unclipped adipose fin, indicating that it was wild, and anglers must release all wild Clearwater rainbows and steelhead. Moreover, Idaho maintains specific guidelines on the catch-and-release handling of wild fish. One of the stipulations is that anglers can’t hang wild fish from a scale.

“Essentially, the mandatory-release regulation counteracts the record-book weight rule,” DuPont says. “That almost prevents any wild rainbows from the Clearwater from ever being considered a record. It’s a catch-22. If somebody wants to declare a catch-and-release record, they have to weigh it on a scale certified by the board of weights and measures. That’s a tough thing to do because you can’t do it in a way that jeopardizes a wild fish’s survival. Even if a rainbow is a record, most people don’t want to risk mishandling it.”

DuPont says the lower Clearwater has uniform water temperatures and a steady supply of dead or stunned high-protein kokanee entrained through the Dworshak dam, so the fish grow at a steady rate year-round. In fact, the habitat is so good, this isn’t the first time an angler harvested a record-worthy fish from the lower river.

Last year, angler Tui Moliga, a member of the Nez Perce nation and biologist for the tribal hatchery, caught a 28-pound, 8-ounce rainbow from the lower Clearwater, according to the Spokesman-Review. Moliga was allowed to keep the fish under tribal fishing rules. However, to qualify for a record, Idaho rules state that fish must be caught in water open to the general public and within an open harvest season for that species. Because the rest of the river was closed to non-tribal harvest of rainbows over 20 inches, Moliga’s fish didn’t qualify for the record books either.

“Our rules do not allow fish with an adipose fin to be harvested. However, Moliga is a member of the Nez Perce nation, which is allowed to keep fish year round,” DuPont says. “That fish was bigger than Larry’s and he wanted to enter it as a state record, but we didn’t consider it, even though Moliga weighed it on a certified scale.”

“We’re always asked for some sort of rule exemption so people can harvest rainbows with an adipose fin, but the only way to do that is to be 100 percent certain people harvesting fish are pulling rainbows and not steelhead. That’s just not possible,” he adds. “Chinook and steelhead anglers fish this river so hard that these big rainbows are caught somewhat frequently; the fish have the hook scars to prove it. Therein lies another catch—if we don’t have rules requiring anglers to release the rainbows, very few fish will have enough time in the river to grow to record size. It’s really complicated; if there’s a concession that allows them to be harvested, the rainbows would never get big enough to vie for a state record.”

The bottom line is this: While there are certainly state-record worthy rainbows in the Clearwater, anglers shouldn’t expect any to make it into Idaho’s record books anytime soon. “It’s virtually impossible for anyone to catch-and-release these fish and meet the requirements to become a new state record,” DuPont says.