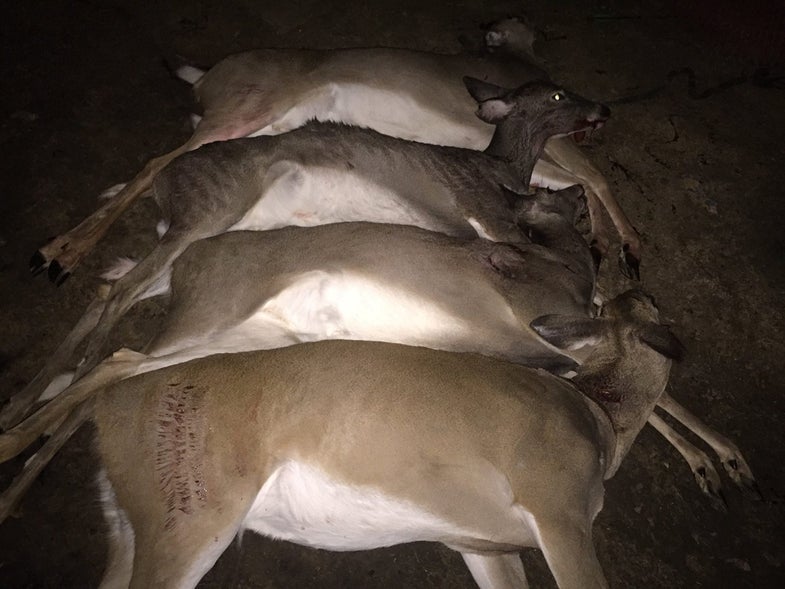 Earlier this month, the Tennessee Wildlife Resources Agency issued lifetime hunting bans to two poachers for killing more than 40 deer out of season. Many of the animals were killed at night and on private property, officers believe.

WSMV.com reports that Eddy Albert, 21, and Densibel Calzada, 23, both of La Vergne, received the harshest punishments ever handed down by the TWRA for poaching. In addition to the ban, the two men must each pay more than $6,000 in court costs and restitution, as well as perform 100 hours of community service. Both also forfeited a rifle and a crossbow.

According to TWRA spokesman Doug Markham, the two men took videos celebrating their kills. Markham also told WSMV that the men “would get on the back of the deer and slap it on the back of the neck or the head, make jokes and thumbs up, and do all this kind of stuff that really is an immature way of acting.”

Likewise, in a press release issued yesterday, TWRA sergeant Matt Brian says, “Their actions were among the worst I have seen for their lack of respect to our landowners and to our wildlife.”

The poachers’ bans extend to 44 other states as a part of the Interstate Violators Compact.

Though the ban is TWRA’s stiffest penalty to date, other states have already issued lifetime bans to poachers, as well as fines into the tens of thousands of dollars. According to the Missoulian, in 2007, a judge in Montana issued Phillip Mark Payton a lifetime ban for poaching. He was also ordered to pay more than $50,000 in fines, restitution, and court costs. Investigators claim that Payton and others illegally killed 86 game animals, though the statute of limitations limited Payton to merely 30 violations.

Yesterday, after the TWRA posted to Facebook the above photo of deer shot, presumably, by Albert and Calzada, a user commented that the men’s punishments were not severe enough, to which the TWRA replied, “Please contact your legislator and let him or her know that.”

Photograph courtesy of the TWRA