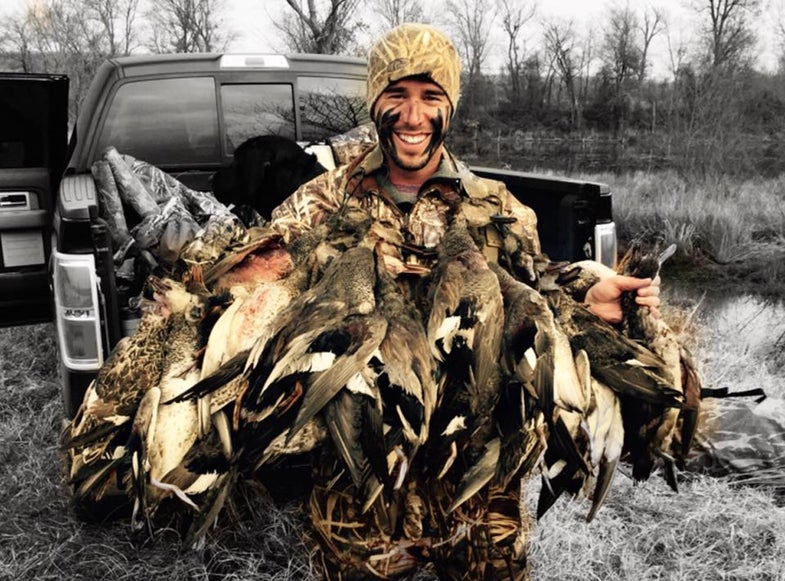 Singer and guitarist Craig Strickland—of the pop-country band Backroad Anthem—remains missing after a duck hunting accident claimed the life of his friend Chase Morland. According to NBC News, the two were hunting on Oklahoma’s Kaw Lake over the weekend when a severe storm blew through the plains. On Saturday, Morland tweeted: “In case we don’t come back, [Craig] and I are going right through Winter Storm Goliath to kill ducks in Oklahoma.”

A search began when the two failed to return on Sunday. Early Monday morning, rescuers found the men’s boat capsized and recovered Morland’s body, the Associated Press reports. Also, The Daily News notes that rescuers found Strickland’s Lab, Sam, alive and sitting by Morland’s body. Strickland, however, remains missing. Although the search continues, the likelihood of finding him is low. Members of Backroad Anthem wrote on the band’s Facebook page that they are “hoping against the odds” that he will be rescued.

Weather.com reports that Winter Storm Goliath killed at least 14 people and injured nearly 50 as it moved from the West Coast toward the Northeast.

Backroad Anthem formed in late 2012 and have opened for established country acts, such as Chris Young, Josh Turner, and Gary Allan, among others. Below we’ve included a video of the group performing “Say It To You.”

On Monday, more than a week after Strickland was reported missing on December 27, his body was found near Kaw Lake, in Oklahoma. The cause of death was determined to be hypothermia, USA Today reports. After the boat capsized Strickland had been able to make it to shore and up a hill before succumbing to the cold. Authorities determined that Strickland’s hunting partner, Chase Morland, drowned in the lake. Strickland’s wife, Helen, wrote on Instagram: “We can finally rest knowing that he is at Home in Heaven with his Father…He experienced no pain in his final moments and simply felt like he was falling asleep.”