A wildfire in Utah is creeping too close to a creek that holds Bonneville cutthroat trout, which are the official... 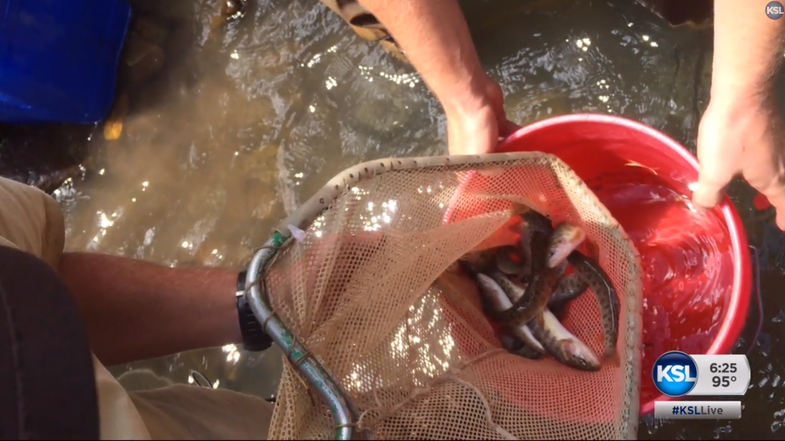 The UDNR caught the fish, then transferred them to water-filled saddlebags for transport to safer waters. KSL Broadcasting
SHARE

A wildfire in Utah is creeping too close to a creek that holds Bonneville cutthroat trout, which are the official state fish. So, the trout are moving.

According to KSL, Utah Division of Wildlife Resources captured 140 Bonneville cutthroat trout this week and moved them out of the hot zone via waterlogged saddlebags.

The cutties, one of four types found in the Beehive State, were in Briggs Creek near Beaver, Utah. The Briggs Fire is blackening the ridge above the creek. The immediate threat to the trout is high water temperatures. Long-term concerns are erosion and flooding which can also kill fish.

UDNR had already planned to move some fish to extend the reach of the specific species, but fire moved the timetable up while also increasing the risk.

“We had to get special permission from the Forest Service to go in there and do this. They were very concerned about our safety,” says Mike Hadley, Utah Division of Wildlife Resources fisheries biologist. “They had people up on the ridge watching the fire and keeping in contact with us on the radio.”

Horses hauled the fish-filled saddlebags to the South Fork of North Creek, which is a few miles from Briggs Creek. The South Fork was already designated for cutthroat trout delivery and competing rainbow trout in the area were already removed so the transfer was a go, just a little bit ahead of schedule.

“We’ve been putting a lot of work into restoring them so that they can be kept off the threatened and endangered species list,” Hadley says.