Have you ever felt cold while fishing? I mean “really” cold; the kind of cold that has you thinking about... 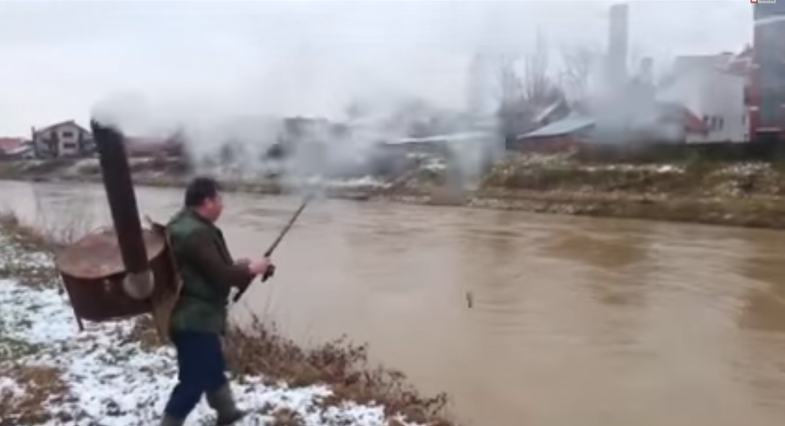 Have you ever felt cold while fishing? I mean “really” cold; the kind of cold that has you thinking about every way possible to get warm? That’s where Serbian angler Jovan Stojanovic recently found himself, only he took his impulse a little too far and actually strapped a metal wood stove, one with a blazing fire inside, to his back. What’s more, his friend was nearby to film it and posted the footage to YouTube.

“I watched fishermen near South Morava freezing, and I felt sorry for them. Then it hit me. You fire up a stove, put it on your back, warm your spine and there is no winter for you,” Stojanovic told InSerbia News.

One question on some viewer’s minds is how did he avoid getting burned? Stojanovic said his solution was to slip a cardboard buffer between his back and the hot stove, and for a while, things seem to be in his favor – he’s warm and he’s fishing; it’s win-win. But when he tries to cast bait into the river, the contraption starts falling apart, and judging from the amount of smoke piping out of the chimney, the fire gains new life.

“Some people say I lost my mind. Why does everything that is unusual have to be a reflection of a madman? Don’t people know how to make jokes anymore and bring some joy in their lives?”

I think that it goes without saying, but don’t try this one on your home waters.