Last week two brothers relaxing on a West Florida beach came to the aid of an injured 10-foot-long hammerhead shark,... 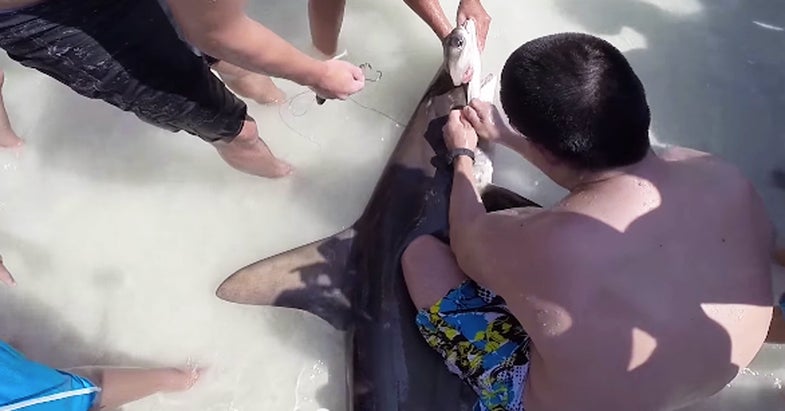 Last week two brothers relaxing on a West Florida beach came to the aid of an injured 10-foot-long hammerhead shark, as captured in an amazing video. UPI reports that the clip, posted by one of the brothers with the YouTube account 1ArmStarfish, shows one of the men dragging the shark toward shore by its tail, much to the chagrin of onlookers.

“All of the distress and yelling heard in the background were caused by a natural fear from certain individuals and lack of understanding the situation as well as the behaviors of hammerhead sharks,” 1ArmStarfish wrote. “Once bystanders realized we were trying to help the shark they quickly did what they could to help.”

Once the hammerhead was on land, the brothers, aided by spectators, held the shark down and removed several hooks from its mouth and a piece of steel fishing line tangled around its head.

“My brother, along with help from bystanders, worked to get the hooks out and save the dying shark,” the YouTube post reads. “My brother was able to pull the shark into deeper water until it was able to swim away safely in an attempt to avoid further injuring itself or the public.”