What is a town to do when brazen deer wander the streets, confronting people in their own front yards and... 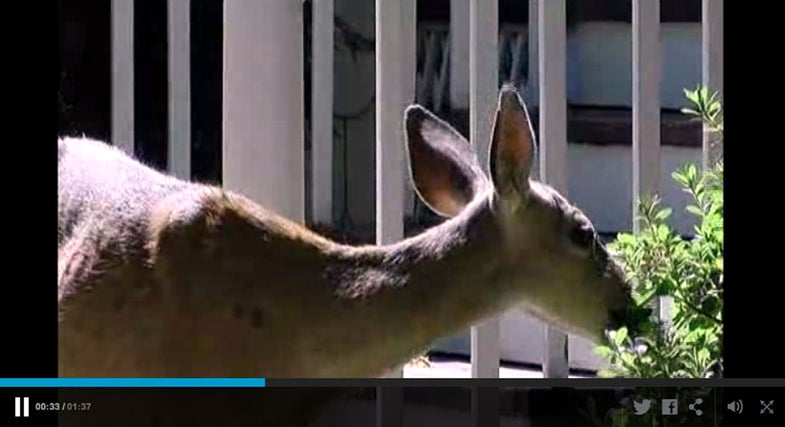 What is a town to do when brazen deer wander the streets, confronting people in their own front yards and hoof-smacking neighborhood dogs? Reuters reports that this question faces Ashland, Oregon, a town of 21,000, tucked in the hills of the Siskiyou and Cascade Mountains.

The blacktail deer have become so aggressive that residents now avoid certain streets where they are known to congregate. “The deer have no fear of humans,” says Mark Vargas, a biologist for the Oregon Department of Fish and Wildlife.

Apparently, the problem in Ashland has been in the making for the past 20 to 30 years, as the deer have been given a free pass to roam the streets by most residents. In fact, Vargas notes that it’s a local tradition to feed and coddle the deer, which only perpetuates the problem. Drought may drive deer to residential neighborhoods, as well.

This month officials—headed by mayor John Stromberg—decided to hold a public meeting, called “Deer Summit 2015,” to try to find a solution to the problem. Vargas says that officials already encourage residents not to befriend, feed, or give water to the deer. Aside from that, though, there’s no easy fix, he says. Deer birth control is expensive and inconsistent, and hunting would be effective only if it resulted in 40 to 50 deer killed per year, Vargas says. He also notes that trapping and relocating the deer would only move the problem for other people to deal with.

According to The Oregonian, an organized cull would be extremely unpopular among residents and local politicians. “Are you serious?” said the major, when asked about a concerted effort to kill the deer. “Have you ever been to Ashland?”

Until better solutions come to light, Vargas says that the best course of action for residents threatened by the deer is to yell loudly at them.