Motorcyclist and hunter Adam Cahill of Gander, Newfoundland, nearly collided with a moose twice in a single week—and he managed... 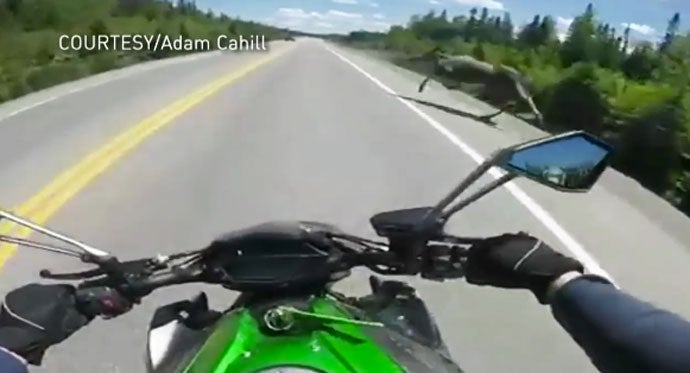 Motorcyclist and hunter Adam Cahill of Gander, Newfoundland, nearly collided with a moose twice in a single week—and he managed to catch the second encounter on film.

According to CBC News, Cahill was riding along the Trans-Canada Highway when he saw the moose charge toward him. As the video below shows, Cahill swerves and narrowly misses an oncoming truck as it veers onto the shoulder. “It’s pretty wild,” Cahill said. “I go out moose hunting…and I won’t see a frigging thing. I go out on a motorcycle, and I’ll see two in a week.”

Cahill’s first encounter with a moose had inspired him to keep a helmet camera strapped on while riding. Lucky for him, the second close call provided exhilarating footage (and didn’t result in injury). “I almost took the biggest bite out of a moose burger I ever ate,” Cahill told reporters. “I was definitely not thinking about my language, that’s for sure.”

The near run-in is intense, but Cahill’s reaction definitely makes the clip (so make sure you turn on the volume).