How long would you stay in the water, unprotected if a great white shark suddenly appeared? One minute? Thirty seconds?... 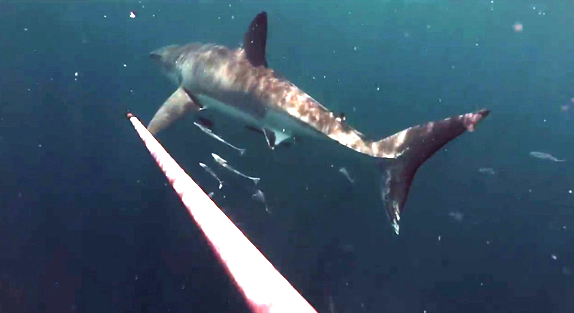 How long would you stay in the water, unprotected if a great white shark suddenly appeared? One minute? Thirty seconds? Only as long as it would take you to swim back to the boat? Well if you’re Zack Spurlock, you take your time making your way back to the boat, get your GoPro camera, and continue swimming for another few minutes.

Spurlock told the Express he was recently spearfishing near Port Canaveral, Florida at nearly 90 feet beneath the surface when he suddenly saw a great white swim beneath him.

“It was on the bottom and slowly swimming south. I then saw it pass by and head north a minute later. It then passed by a third time, and after it swam out of sight, I decided it was time to head up to get the GoPro,” Spurlock said.

Topside, while Spurlock was trying to get the camera out of his boat, someone on board noticed the shark approaching from behind. Rather than get out of the water, he went back under to capture video footage, though he said he would’ve had an easier time if he wasn’t still clinching to his spear gun and a bag of lionfish.

“The water was crystal clear, so it’s amazing to me how incredible these large creatures are at staying in your blind spot,” Spurlock said.