If you’re a fan of the movie Jaws (Cermele, listen up), then you’ll likely relish the terrifying moments in this... 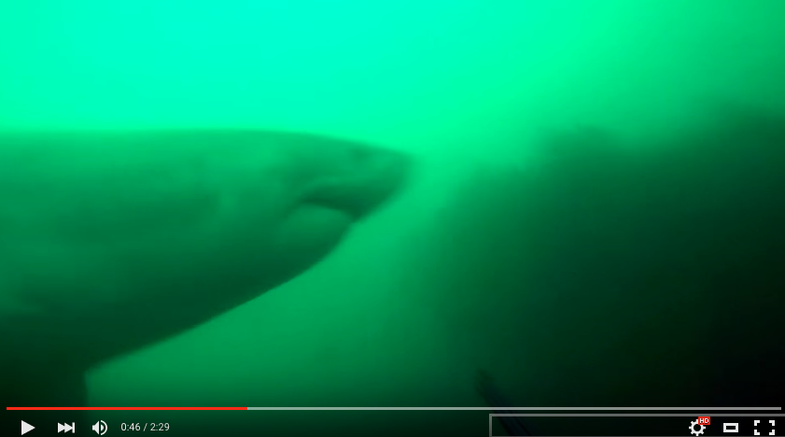 If you’re a fan of the movie Jaws (Cermele, listen up), then you’ll likely relish the terrifying moments in this new video, uploaded to YouTube on October 19th. In the clip, a great white shark suddenly appears from murky water just a few feet from a South African spear fisherman.

The Daily Star reports that the diver who shot the footage, Johan Potgieter, was about 19 meters beneath the surface, with a camera strapped to his head, when the run-in occurred.

In the beginning of the clip, Potgieter slowly makes his way through the unclear water toward some coral, where dozens of fish circle. Just as he levels his dive, a big shark comes into view within just feet of his left arm, and you can hear Potgieter’s muffled screams when he spots it. As Potgieter tries to retreat, the shark turns and charges again, and for a second time, you can hear Potgieter’s horrified screams.

Somewhat blinded by the foggy water, Potgieter makes a dash for the surface, but as he warns his companions of the danger, the shark appears again just below his fins. It takes only a few seconds for the boat to motor over and pick up Potgieter—but if I had to guess, judging by the camera’s convulsing pans, I’d say it was the longest few seconds of Potgieter’s life.