For the last five years, Sen. Tom Coburn from Oklahoma has released an annual report called Wastebook, which reveals the... 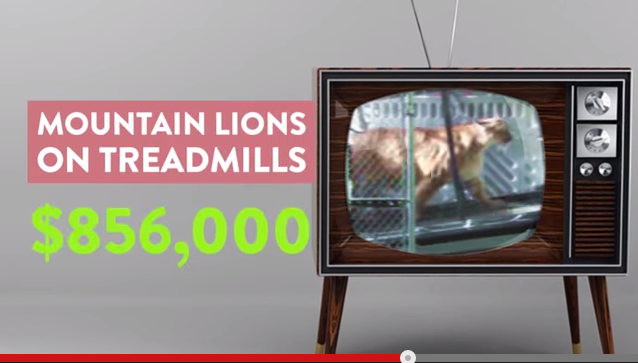 For the last five years, Sen. Tom Coburn from Oklahoma has released an annual report called Wastebook, which reveals the top 100 wasteful federal government projects that collectively cost taxpayers billions. In what is likely the final installment of Wastebook, as Coburn will retire in 2015, he reveals that $856,000 was spent through a National Science Foundation grant to study mountain lions on treadmills. Three captive cougars were trained to use treadmills by researchers at the University of California-Santa Cruz, who reported that it took eight months for the big cats to feel “comfortable” on the exercise machines. In October, they posted a YouTube video of what that looks like.

The study served to collect data on the mountain lion’s oxygen consumption and energy use for different activities in captivity, to eventually compare with data gathered by special collars on mountain lions in the wild. The research could help us learn more about the power behind the cat’s pounce and other hunting behavior but, from the treadmill study alone, scientists have concluded that “mountain lions do not have the aerobic capacity for sustained, high-energy activity.”

“They are power animals. They have a slow routine walking speed and use a burst of speed and the force of the pounce to knock down or overpower their prey,” explained UC Santa Cruz professor Terrie Williams.

Coburn’s report states that “while support for basic science is not itself wasteful, federal research agencies should better prioritize how tax dollars are directed to ensure adequate support for more pressing scientific endeavors.” He probably doesn’t mean studying shrimp on treadmills, an endeavor that cost the U.S. government $560,000 in 2011.

The report also mentions a $1 billion Pentagon project to destroy $16 billion worth of ammunition that became obsolete, unusable, or banned by international treaty, according to the Fiscal Times.

You can read all 200 pages of Wastebook 2014 here, or watch a highlight video on Coburn’s YouTube channel.