Video: Hunter Jumps Into Freezing Lake to Save Drowning Dog

Recently, 26-year-old Jonas Lundh nearly sacrificed his life by jumping into a freezing lake—risking drowning and hypothermia—to save his dog... 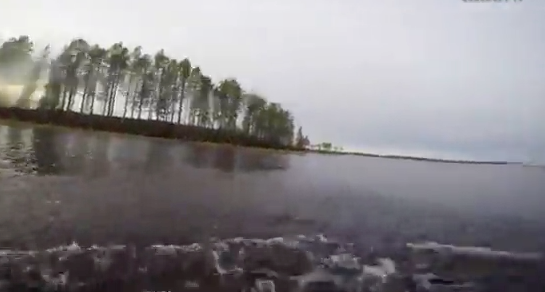 Recently, 26-year-old Jonas Lundh nearly sacrificed his life by jumping into a freezing lake—risking drowning and hypothermia—to save his dog after it mistakenly chased a moose into the water and couldn’t get out. And a GoPro camera on Lundh’s head captured the entire incident.

Daily Mail reports that Lundh was moose hunting with his father near Koltrask Lake, Sweden, when the family’s tracking dog, Rocky, suddenly spooked an animal and gave chase. The moose made it through the water to a nearby island—but Rocky wasn’t so lucky. Fortunately, Rocky was wearing a GPS collar, so Lundh knew the moment the dog entered the water, but he feared the worst. “I heard Rocky make a strange bark, and I looked again at my GPS and saw they were heading out into the water,” Lundh said. “That’s when I knew I had to act really quickly.”

After scrambling through the forest to the lake’s shoreline, Lundh could see the dog struggling. “I ran closer to the water, looked around me, and I saw the moose and dog out in the water,” said Lundh. “The only thing I had right there in my mind was that I couldn’t watch him drown.”

Lundh said the water was so cold that he could barely breathe or move, but, as you can see in the video, he never stops making his way toward Rocky. Once he reaches his beloved dog, Lundh is able to pick it up and get to an island in the middle of the lake. From there, he shouted for his father to come help—but it was another 30 minutes before he found them. Unfortunately, Lundh and Rocky had to swim back across the lake to reach his father; however, Lundh said that Rocky stayed by his side the entire way, and that they made it home safely and are eager to go hunting again.

“When I got to him and grabbed him by the neck and lifted him up, it was an amazing feeling when I knew he was going to survive,” Lundh said. “Then we walked up to the little island, and I smashed my way through the ice so both me and the dog could make it up there. And then we started screaming for help, because I knew my father was not far away.”