Dan Casey, a hunting guide who was also raised on a fur farm, has become an unlikely viral video sensation... 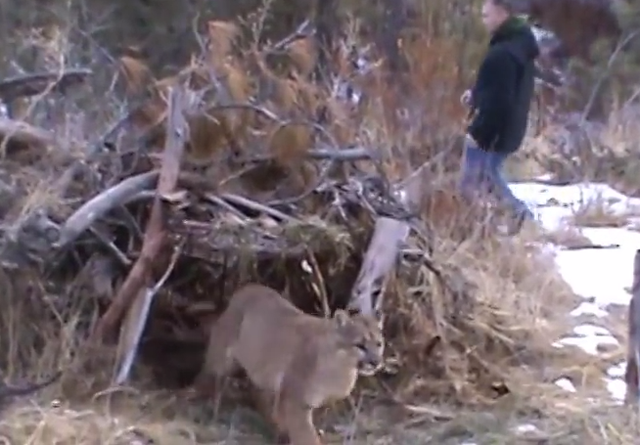 Dan Casey, a hunting guide who was also raised on a fur farm, has become an unlikely viral video sensation after setting out to teach his sons about trapping. He and his boys set up a cage trap, which they covered with branches and grass about 300 yards from their home, hoping to draw a fox or bobcat to a can of clams and some alfalfa hay inside. Casey had planned to release anything they caught, but he got a bit more than he bargained for when, the next morning, a mountain lion was sleeping inside.

In the video, which Casey’s wife filmed from the safety of their truck, he briefly explains the situation, notes that it’s illegal to trap cougars in South Dakota, and then tries to figure out how to open the cage without getting mauled by the cat. “As you can see, she is unhappy,” Casey says in the clip.

Most of the cage is covered with brush, so there’s only one way for the cat to escape—out the front door. Doing his best not to spook the animal, Casey props open the door’s lever with sticks, knowing full well that the cat could be on top of him with just one lunge. Thankfully, the lion remains calm and Casey is able to move to the side, reach down, and open the door. It takes a few moments for the big cat to realize it’s free to go, but when it does, it doesn’t waste time disappearing through the brush.

According to the Rapid City Journal, the state Department of Game, Fish & Parks conducted an investigation and found that no laws were broken. They said Casey handled the situation well, but noted that trappers encountering lions should call a wildlife officer to assist with a release, because they can use tranquilizers if necessary, or possibly fit a collar to the animal for research purposes. “I wasn’t real nervous, but I also don’t want to recommend this to people,” Casey adds. “I don’t want people to think there’s nothing to fear. But 99 percent of the time, they’re not going to bother you.”