A video showing two bull moose battling it out in an Anchorage, Alaska, suburb is making the viral rounds this … Continued 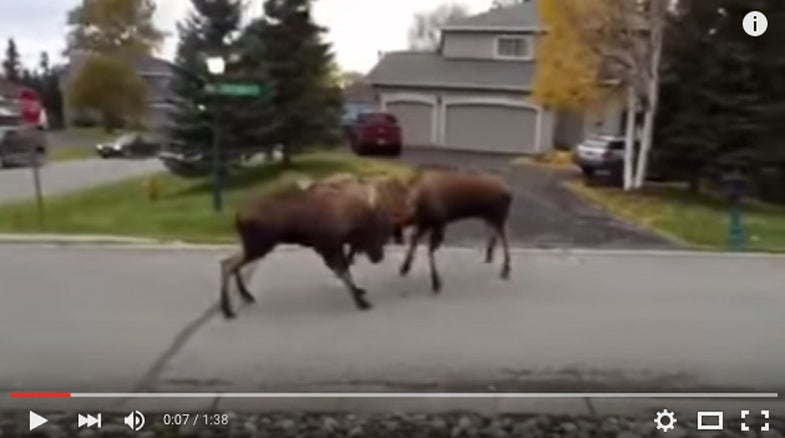 A video showing two bull moose battling it out in an Anchorage, Alaska, suburb is making the viral rounds this week, offering viewers a front-row seat for a look at how big and aggressive these animals can be.

UPI reports that Bill Tyra and his son Josh captured the clips last Friday when they were driving through the Goldenview Park subdivision. The first clip is only a few seconds long. Once the fight progressed near Bill’s feet, he stopped recording, moved to higher ground, and began rolling tape again.

You can hear the hooves of the two massive animals slipping and sliding on the blacktop. When they’re able to find traction, the scraping is interrupted by the loud, dull clap of their paddles crashing together. At one point, the two accidentally scratch and bang on the homeowner’s car.

Eventually, the fight spills out into the neighborhood streets and seems to get alarmingly close to onlookers. Finally, though, one moose gets the upper hand, and his opponent retreats, at which point the battle ends.