If at first you don’t succeed, try, try again. That’s the lesson a mother raccoon tries to teach her kit... 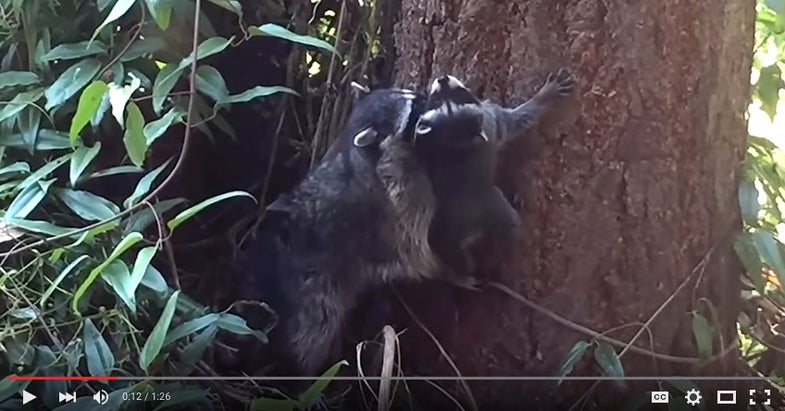 If at first you don’t succeed, try, try again. That’s the lesson a mother raccoon tries to teach her kit in a recently posted video, repeatedly coercing her baby off a roof and onto a tree, despite the young one’s reluctance.

As National Geographic notes, while the mother raccoon’s youngster seems hesitant to learn, Florida State University biologist Joseph Travis said raccoons are one of many species that learn by imitating others, and that the little guy will eventually get the hang of it.

“She’s saying, ‘Watch me, now you do it,’” Travis said. “The mother is going to keep putting it on the trunk until the kit figures it out.”

Climbing trees are one of raccoons’ best defenses against predators, allowing mothers—like the one in the video—to find a safe nook high in the tree, where they can sleep and care for their young during the first critical weeks after birth.

In fact, Lando McCall, a wildlife specialist for the Washington Humane Society, says he believes the mother raccoon’s original nest was disturbed, and she might have been trying to climb the tree to find a new den. He says most raccoons learn to climb trees when they’re around two months old. The little one in the clip is likely about a month old, and that may be why Mom is doing all the work.