Authorities in a Salt Lake City, Utah, suburb captured a female mountain lion last Friday after it was spotted lurking... 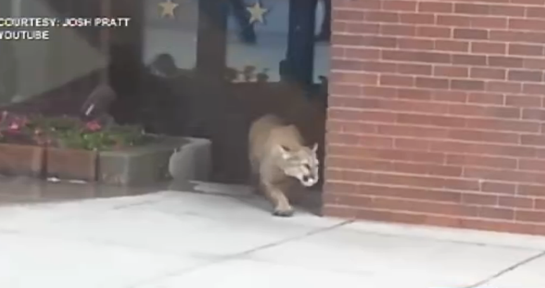 Authorities in a Salt Lake City, Utah, suburb captured a female mountain lion last Friday after it was spotted lurking around a suburban shopping center.

ABC News says the lion crossed a busy street around 8 a.m. and hid near the entrance of a steakhouse. While many of the people coming and going were unaware of the cat’s presence, some stopped to take photos and video.

When the cougar decided to run, a police officer on the scene fired one shot at the animal but missed. It jumped a fence and hid in the brush near a train line where wildlife officers were able to get close enough to hit it with a tranquilizer dart.

While lion sightings are common in the suburbs around Salt Lake City, authorities say its rare to see one travel so far into town, and its believed this particular animal simply followed a ravine or gulley and didn’t know how far it had traveled. Utah Division of Wildlife Resources spokesman Scott Root said the lion was about two years old and weighed 100 pounds and the agency plans to release it back into the wild.

“The cat wasn’t acting aggressively and doesn’t have a history of being caught, so she’ll be given a ‘second chance,’ ” Root said.