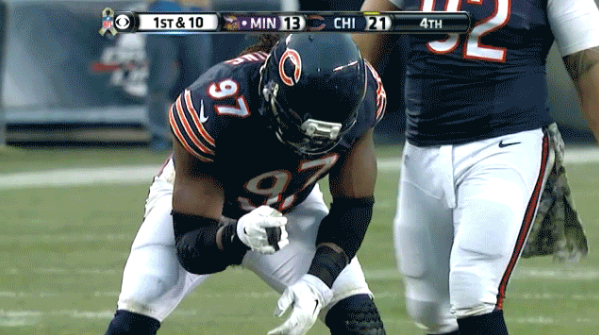 Chicago Bears defensive end Willie Young is known for his unique quarterback sack celebration. An avid fisherman, Young’s trademark move is a casting and reeling pantomime, which he altered slightly after sacking Minnesota Viking quarterback Teddy Bridgewater in the Bears’ win on Sunday. Young acknowledged the cold in Chicago on game day by pretending to go ice fishing. A story by CSN Chicago shows the play and Young’s reaction on a loop.

He decided to make the fishing dance his signature celebration because, he says, “football [means] a lot to me, and fishing also [means] a lot to me.” He’s had 14 career sacks in four seasons—three of them with the Detroit Lions.

According to the Chicago Sun-Times, Young spent his childhood in rural Georgia and Florida, where his father taught him to fish when he was very young. As an adult, he moved back to the Sunshine State, which he describes as the “fishing capital of the world,” and enjoys having Lake Okeechobee 30 minutes to the west, the Atlantic Ocean five minutes to the east, and a stocked pond not far from his front door. Check out his Twitter feed to see what Young’s catching.